At last the weather plays ball and I can plan a walk somewhere other than the Peak District. In fact the best weather was to be found further north. It's been four months since my last walk in the Lake District so I decided to go there and do my first walk in the area for this year. After a bit of thinking I went for Grasmere and one of two routes depending on how things looked when I arrived. The one I wanted to do was to head up Stone Arthur (which would have counted towards my second round), on to Great Rigg and Fairfield, back to Great Rigg then south to Heron Pike and back down to Grasmere via Alcock Tarn. There was cloud on the tops of the fells when I parked up and a pretty strong and cold breeze so I decided to do my alternative of Silver How and Loughrigg Fell. I didn't regret it, I had some nice sunny spells to walk in and the cloud never cleared off the fells that I might have been walking on. Since I was in Grasmere I took the opportunity to pop into Sarah Nelson's and buy some excellent Grasmere Gingerbread.

From the layby on the A591 outside Grasmere I crossed the road and followed the footpath into the centre of the village, then after walking north, onto the drive to Allan Bank. I kept on the drive past Allan Bank until it ended at some cottages then continued uphill and after crossing Wray Gill I eventually arrived at the summit of Silver How. After leaving the summit I decided to head southwest to the top of the slope up from Great Langdale before heading for Loughrigg Fell. It's worth the effort for the view. Having taken it in I made my way east past Spedding Crag, across Dow Bank and down to the road from Grasmere to Elterwater. From there I picked up the bridleway to the Loughrigg Terrace path, and after emerging from the wood I took the path up to the summit of Loughrigg Fell. I then made my way east across the fell until I reached a path that went north and back to Loughrigg Terrace. I followed this west until I could head down to Grasmere's weir and from there I took the lake-shore path until this ended and I had to take the road back to Grasmere.
Route map 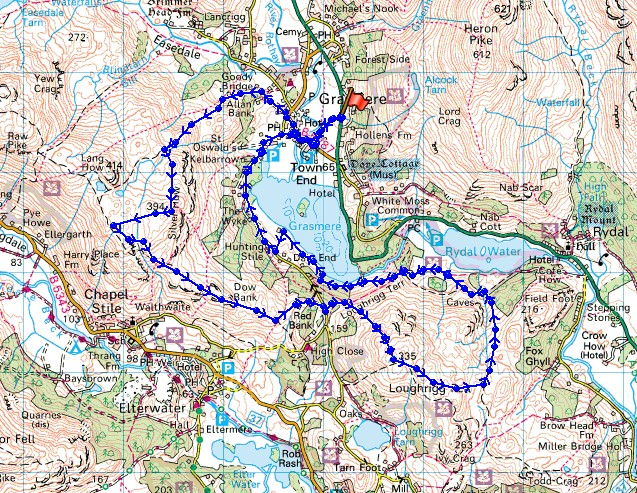 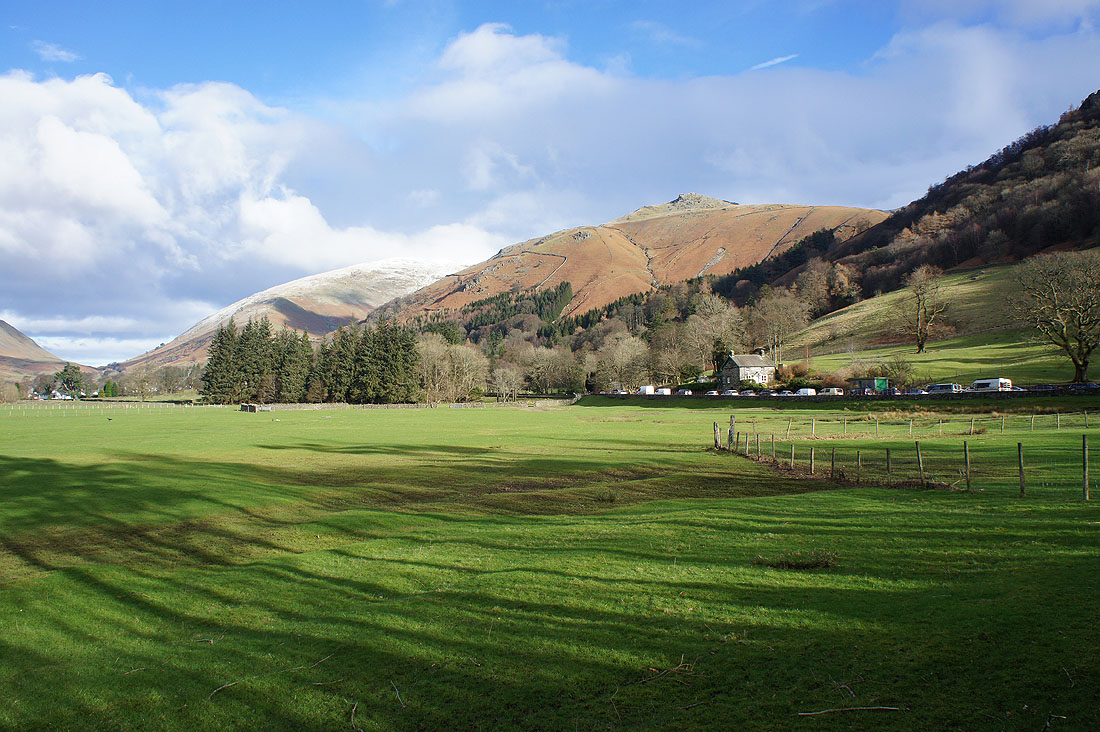 Seat Sandal and Stone Arthur as I head for Grasmere 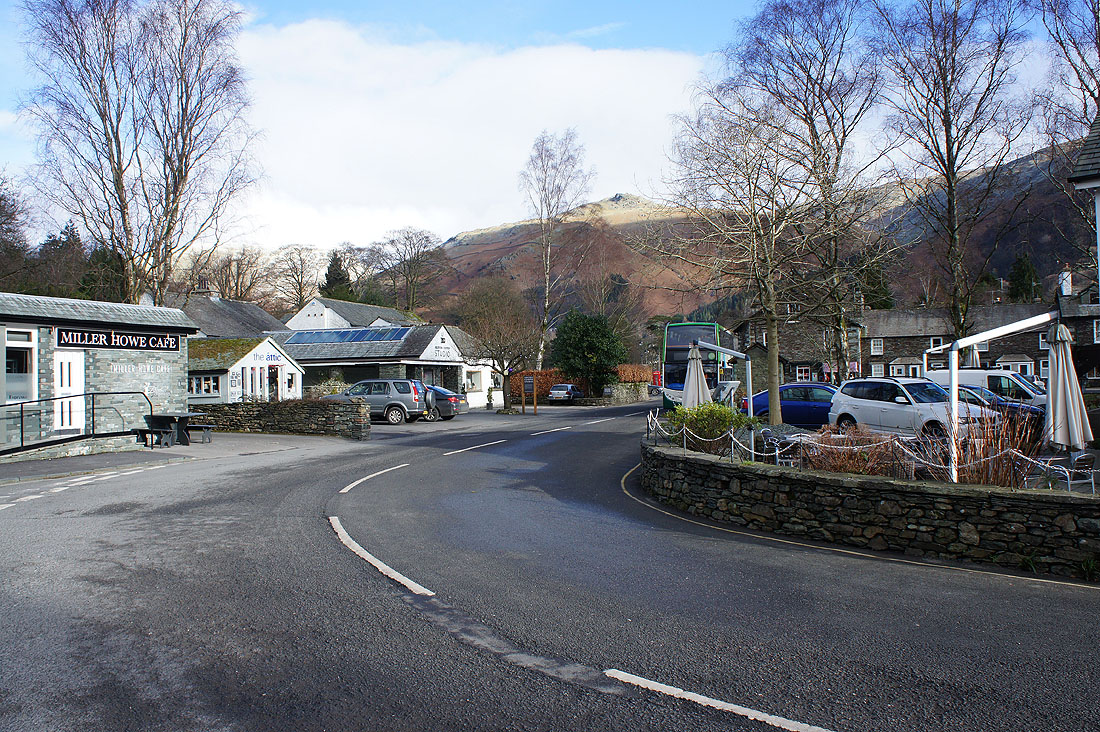 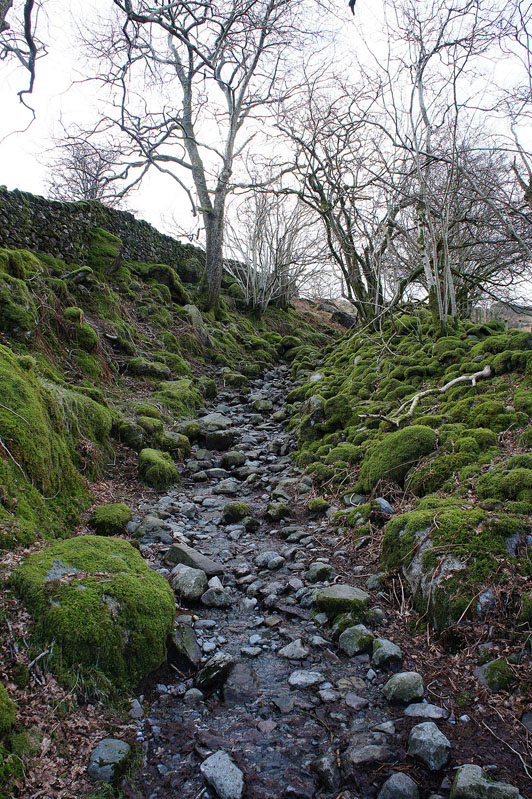 A rough and stony path as I head uphill 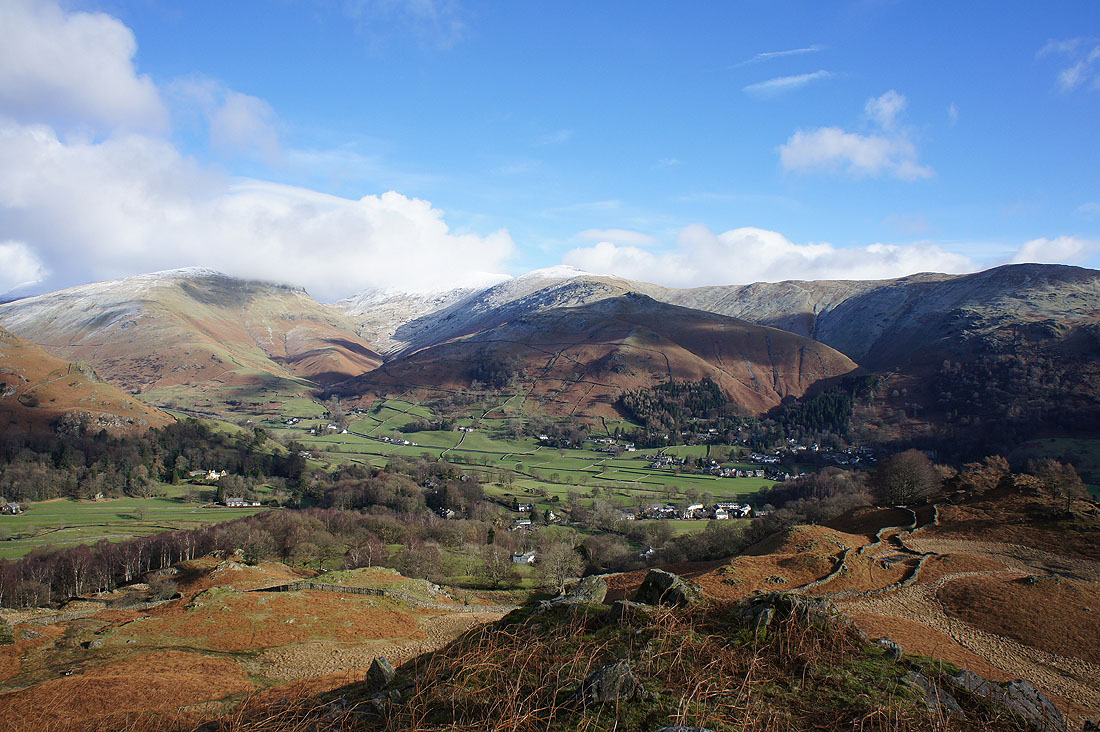 After crossing Wray Gill I'm soon treated to this great view across the Vale of Grasmere to a cloud topped Seat Sandal and Fairfield, Great Rigg and the ridge to Heron Pike 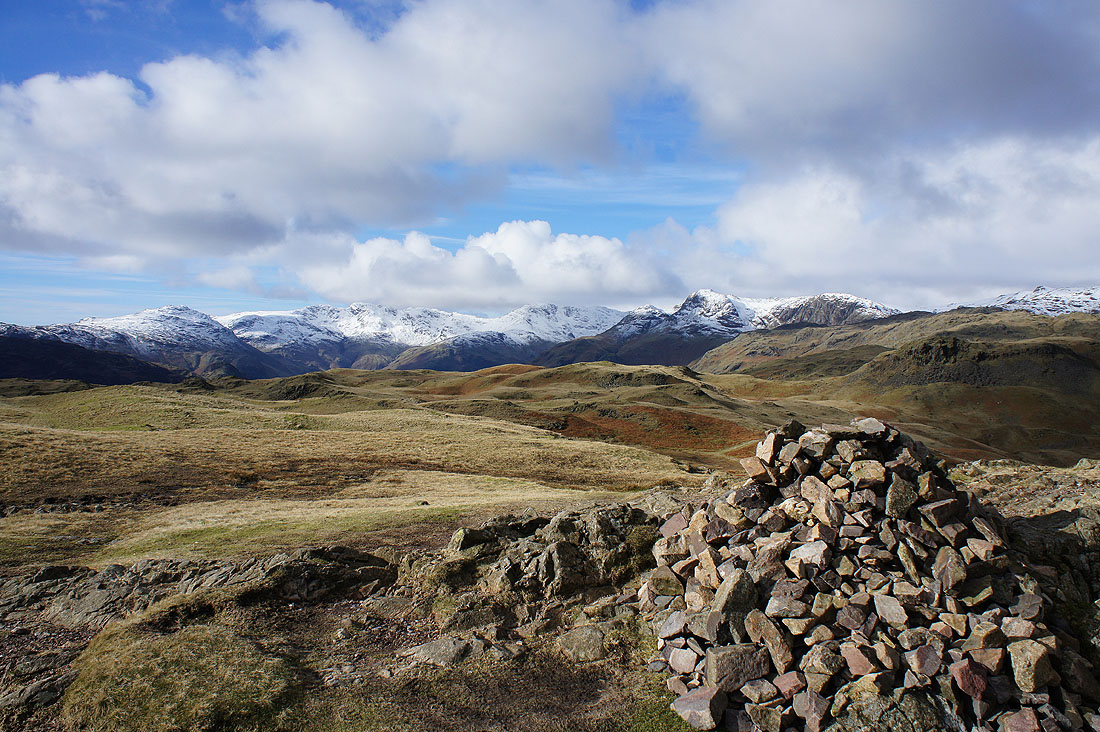 On the summit of a cold and windy Silver How. Looking west to Pike o'Blisco, the Crinkle Crags, Bowfell and the Langdale Pikes. 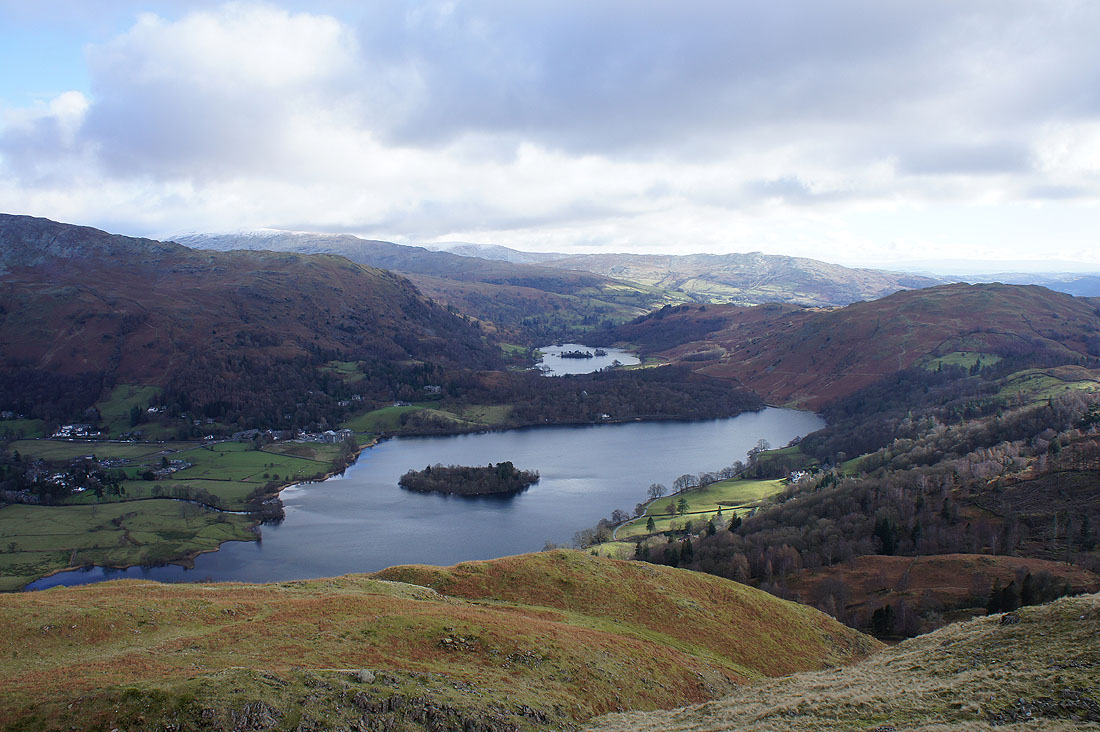 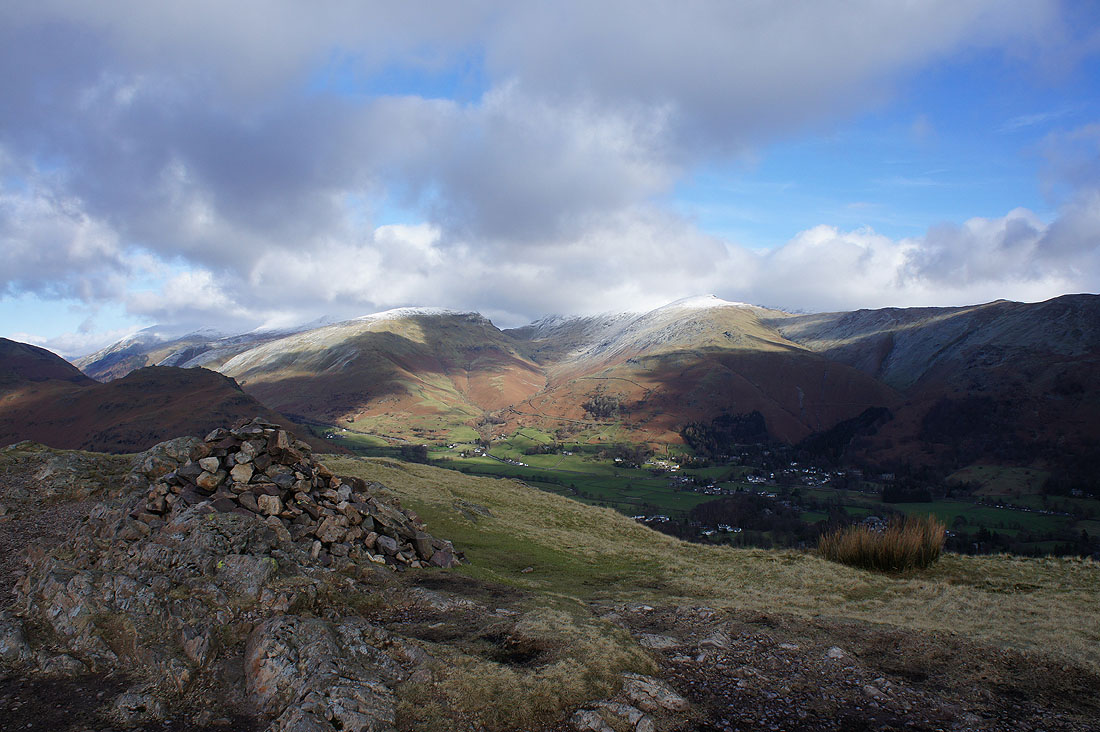 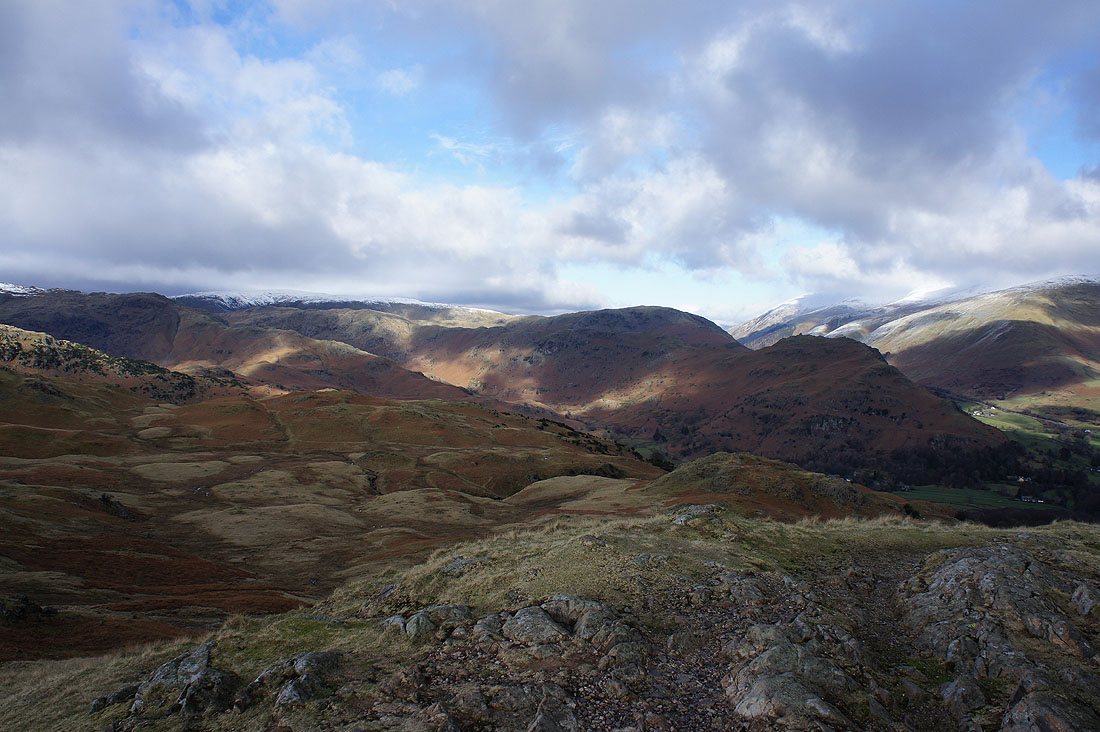 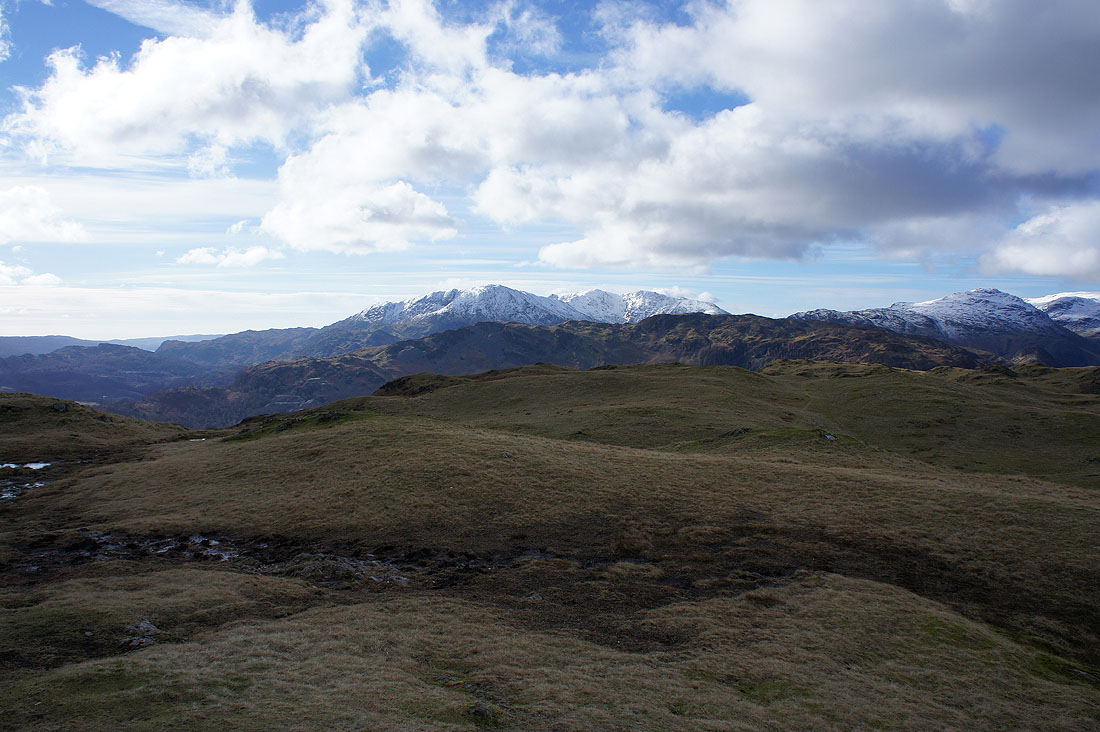 Wetherlam, Swirl How and Great Carrs behind Lingmoor Fell 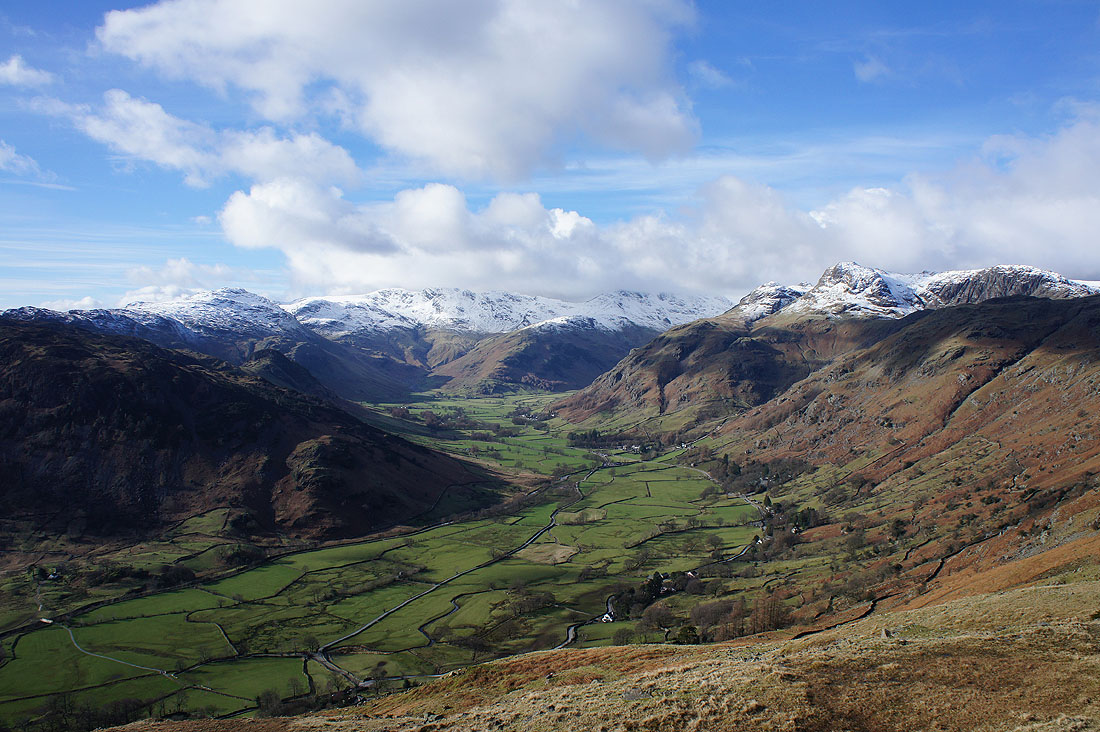 Before I made my way to Loughrigg Fell I had to head for the top of the hillside above Great Langdale. Worth it see this view to the head of the valley. 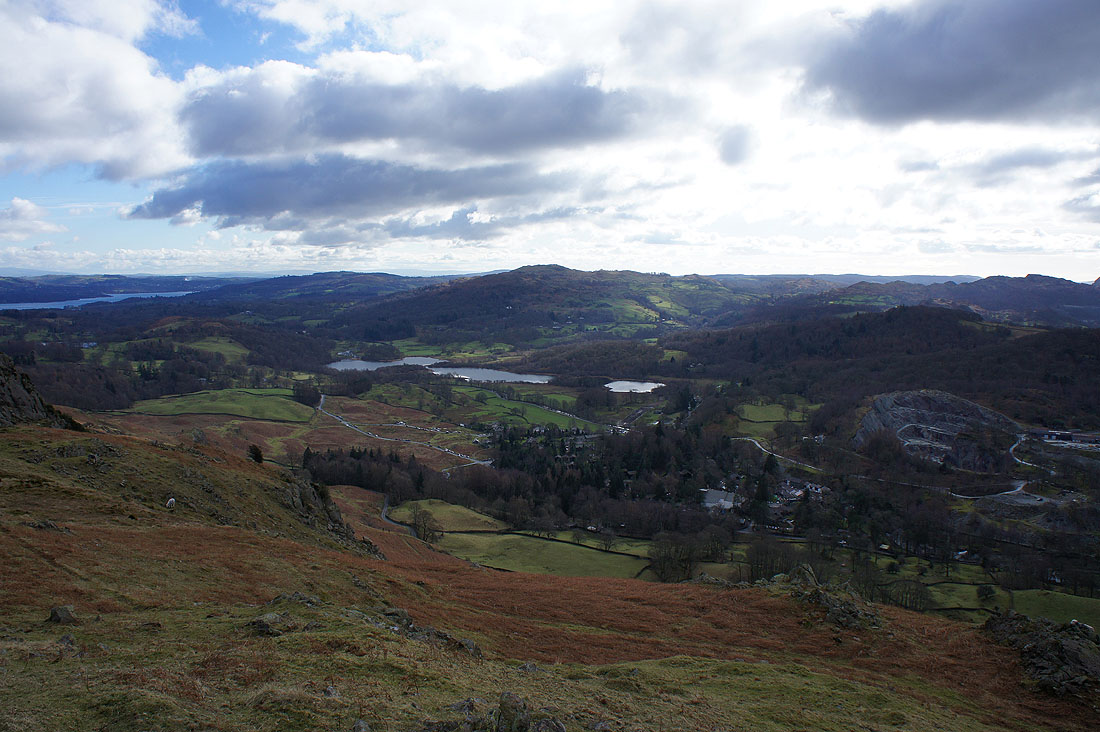 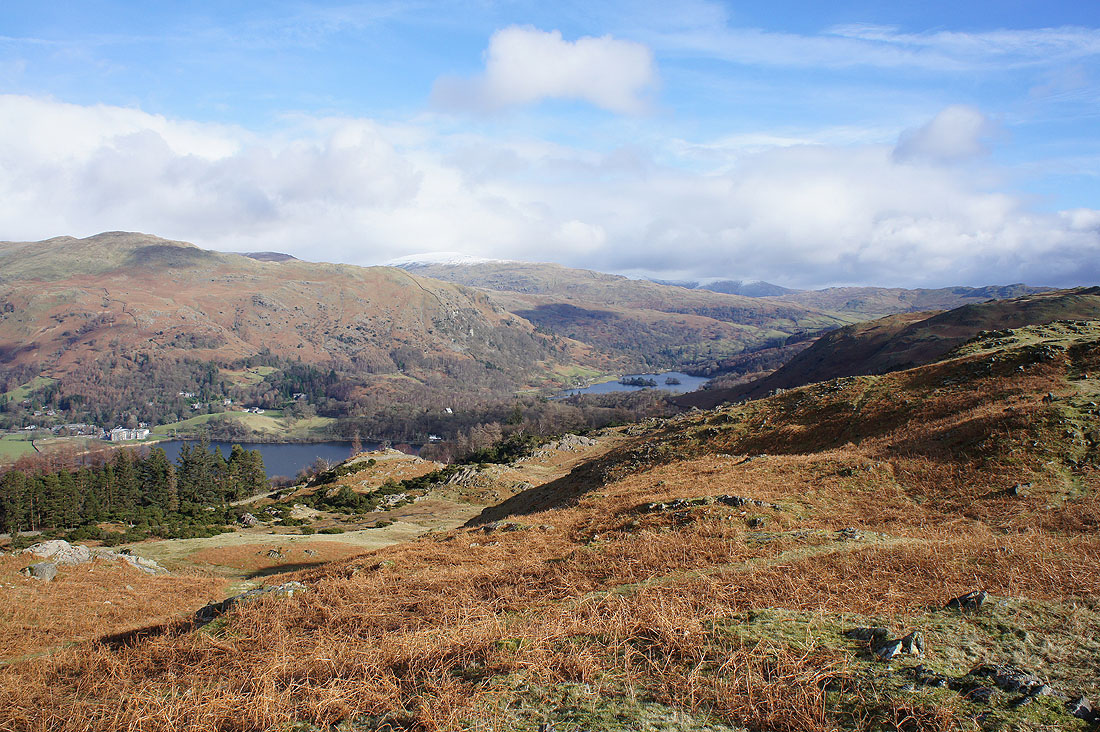 Grasmere and Rydal Water as I head up onto Dow Bank 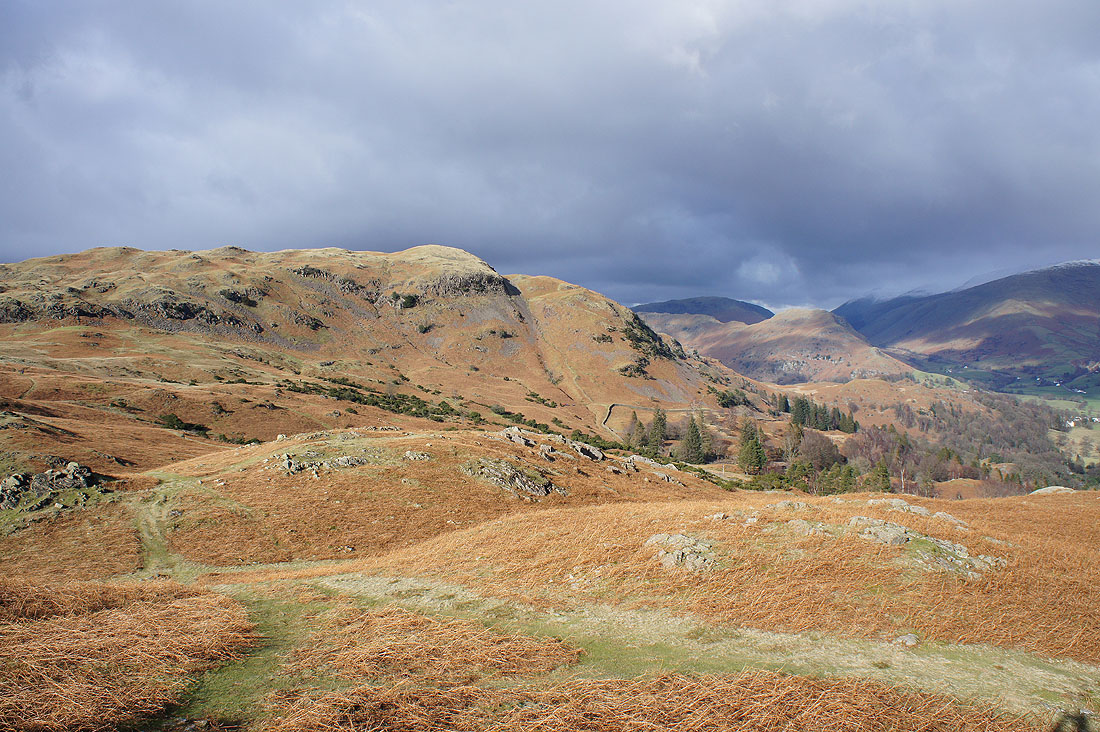 Looking back to Silver How 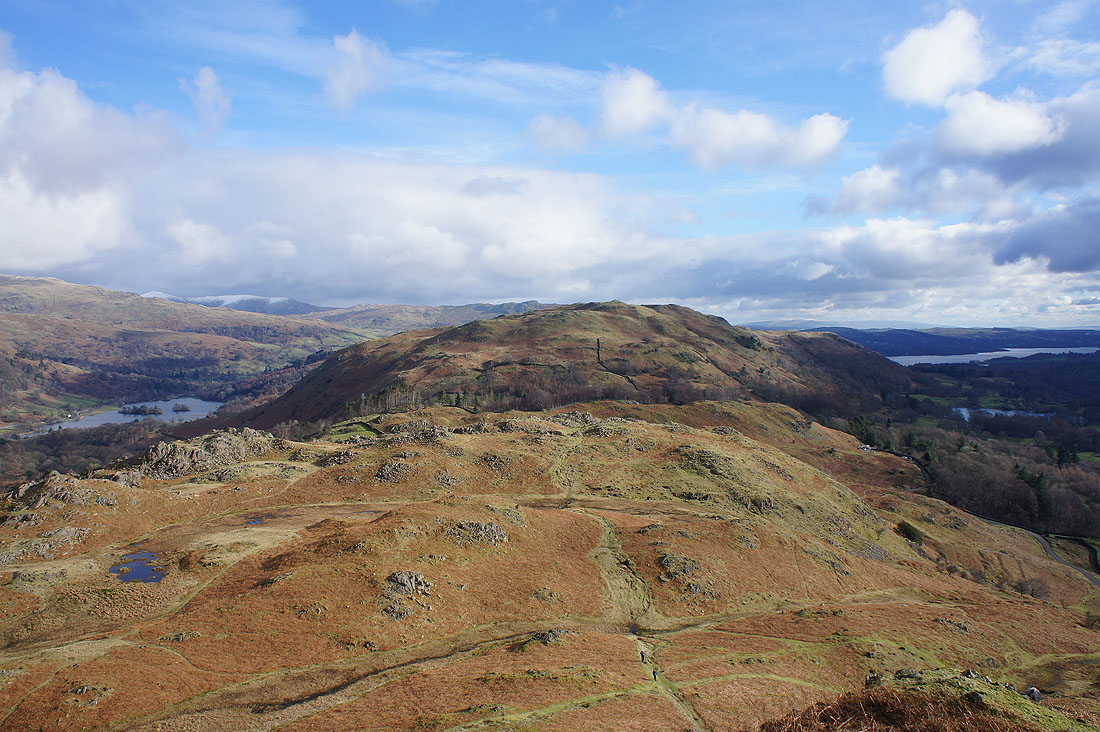 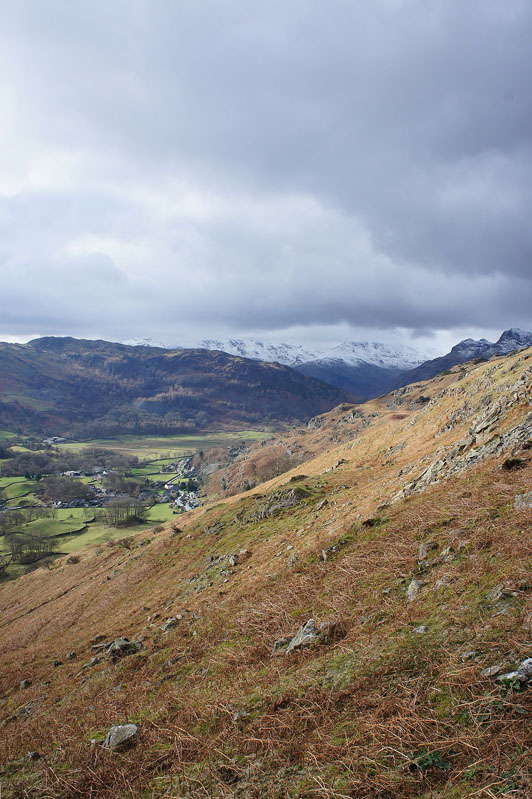 A peep round the corner up Great Langdale as I make my way down from Dow Bank
After crossing the road from Grasmere to Langdale, on the bridleway to the Loughrigg Terrace path and Grasmere as I climb to the summit of Loughrigg Fell 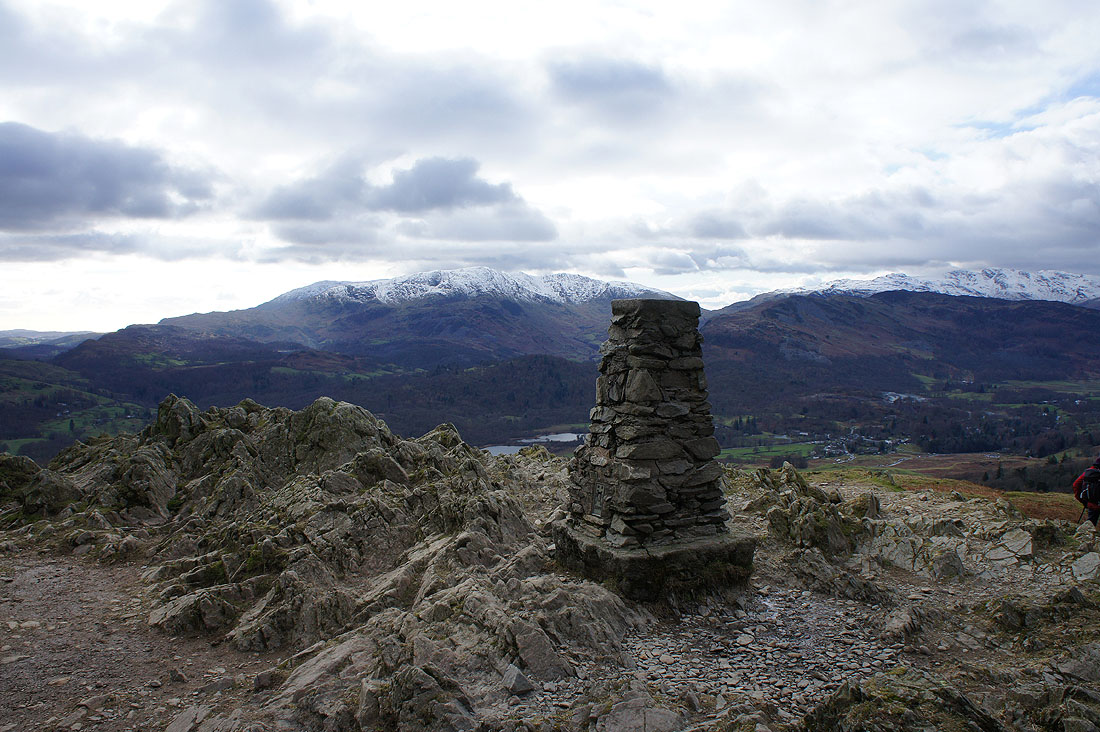 A briefly unoccupied trig point on the summit of Loughrigg Fell 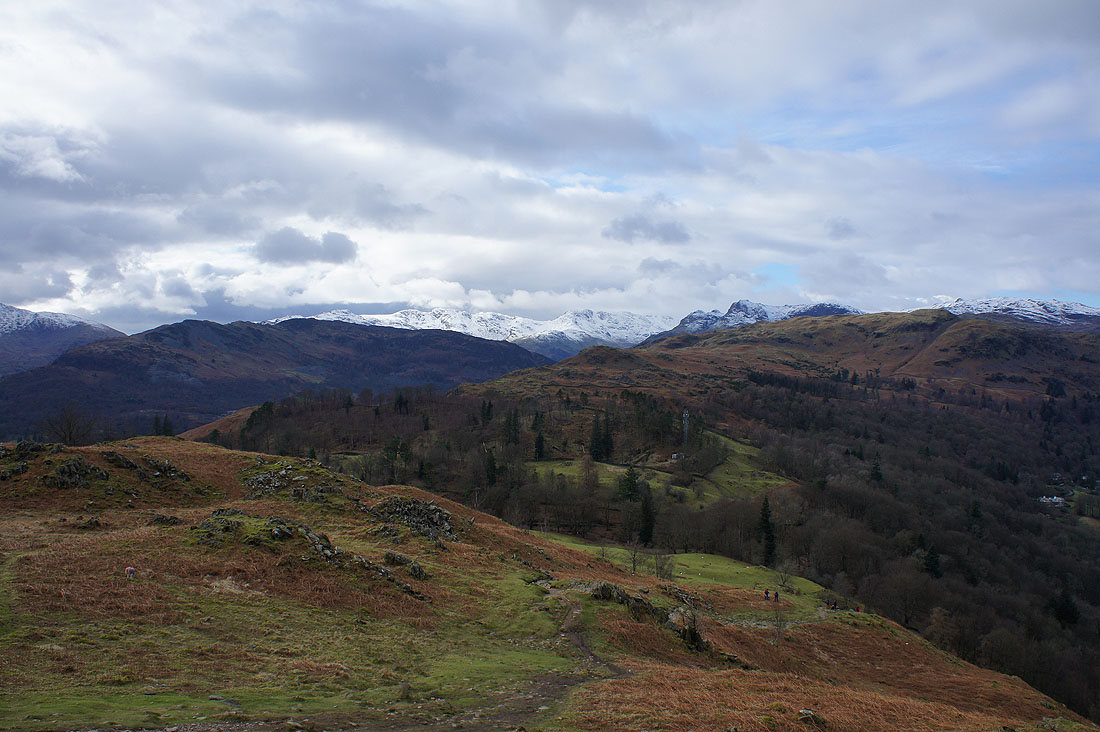 Snow topped fells at the head of Great Langdale 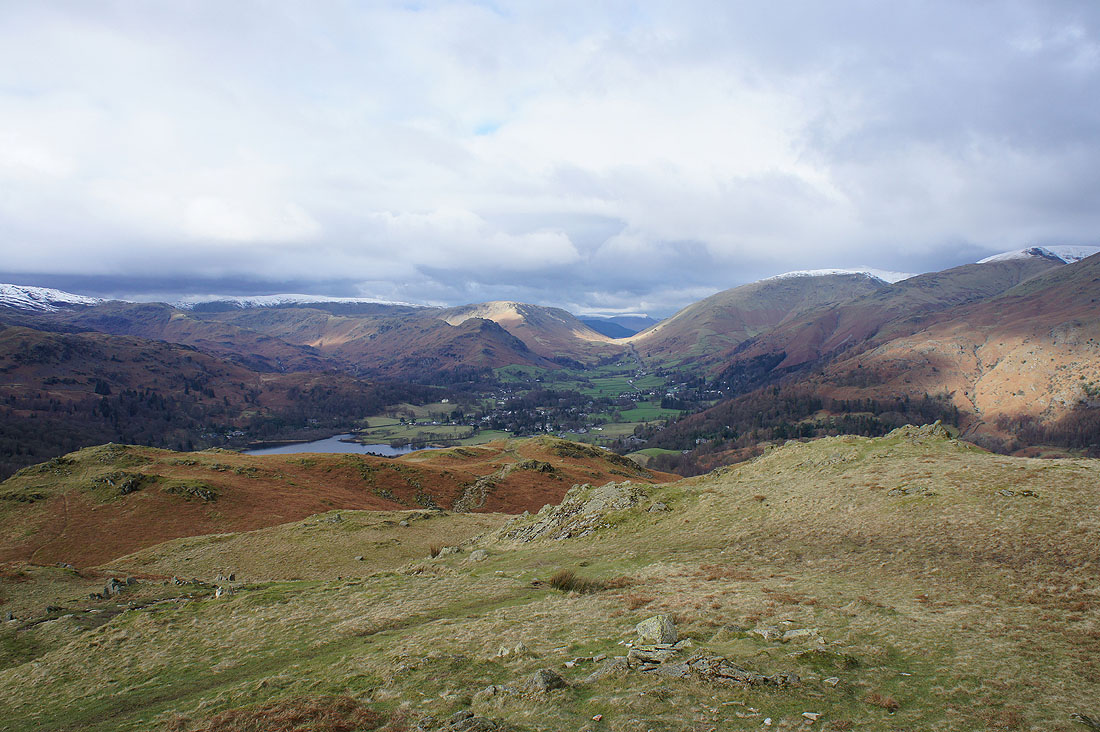 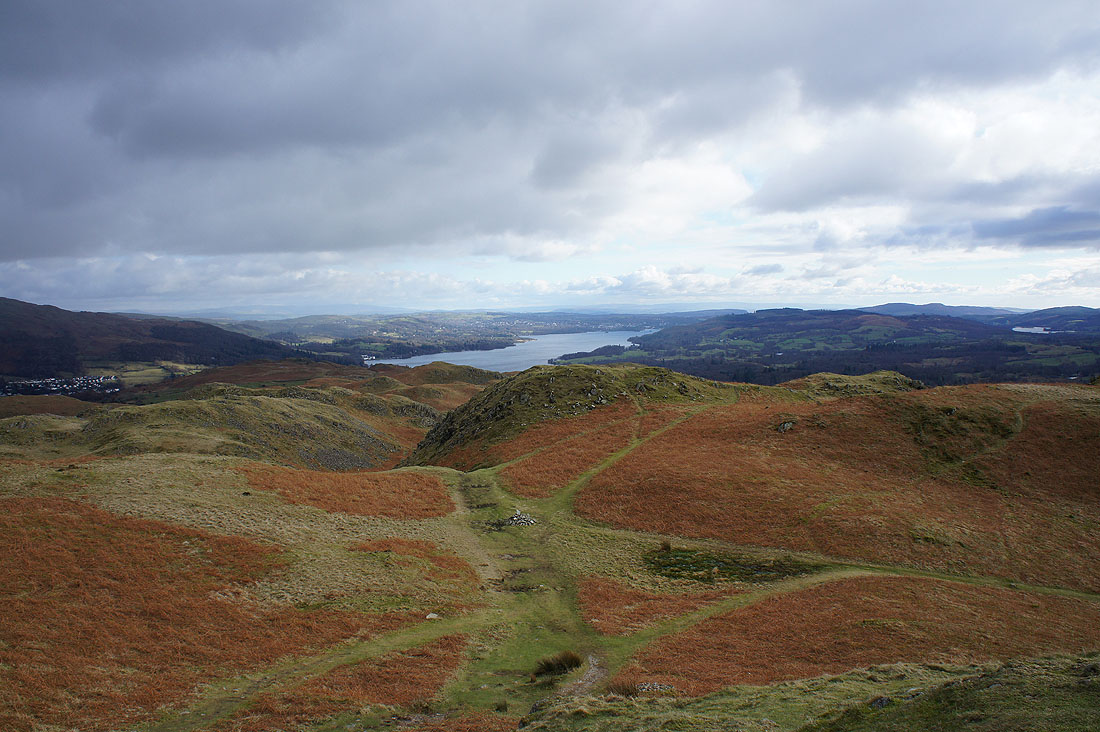 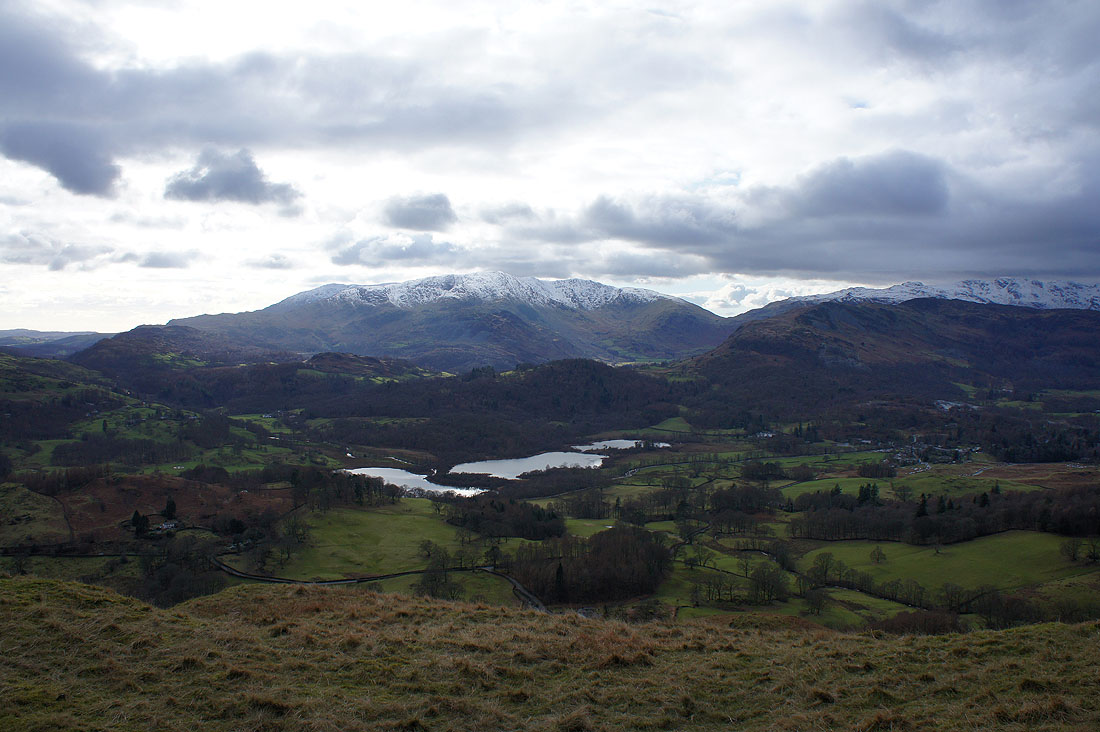 There's a good view from above Lad Crag, just to the south of the trig point. Elter Water and the Coniston fells. 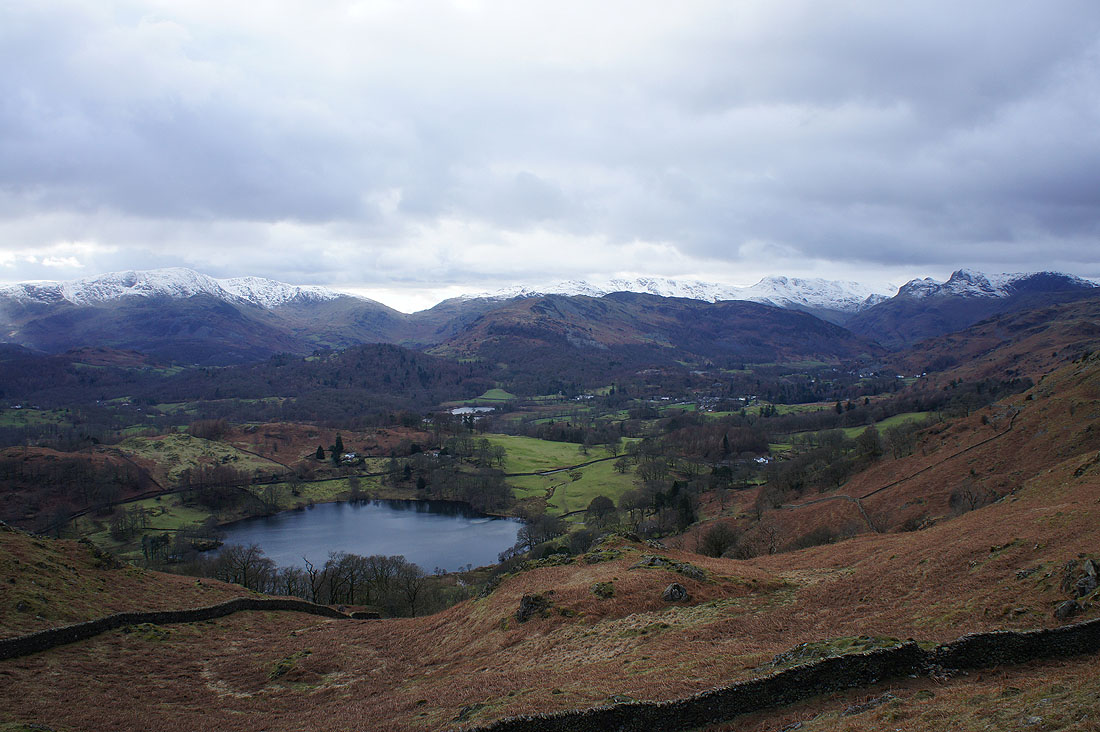 Then a bit further to the east, a nameless hump offers this view of Loughrigg Tarn, the Coniston fells, Lingmoor Fell and the head of Great Langdale 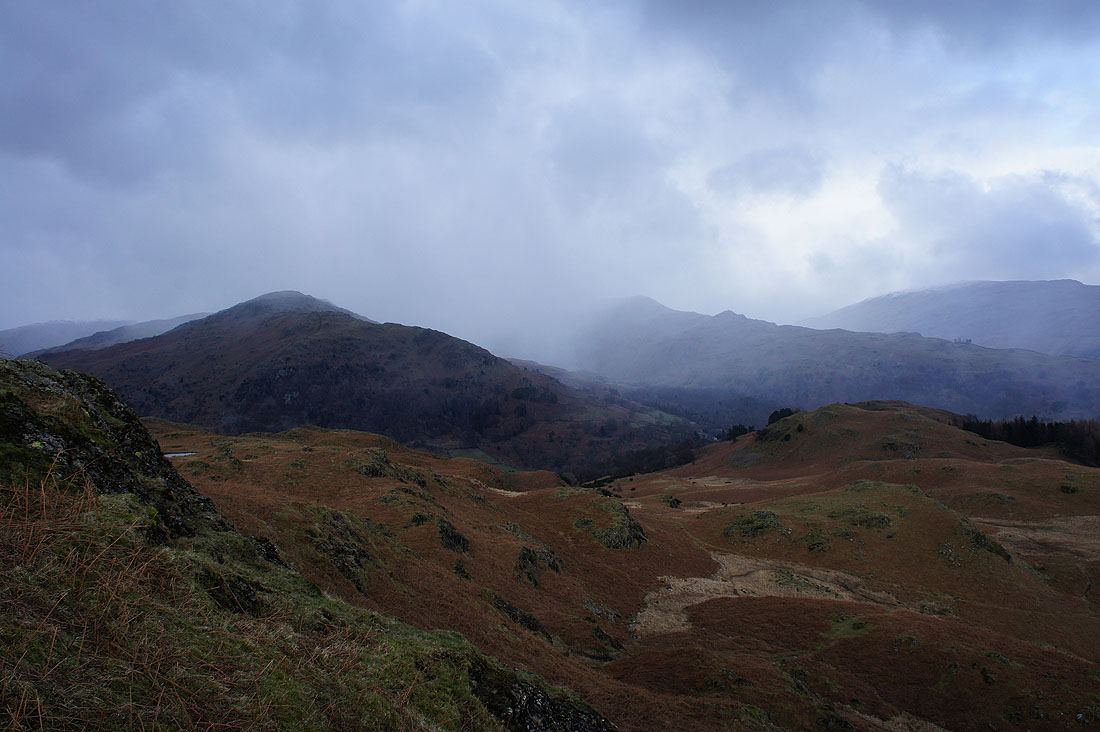 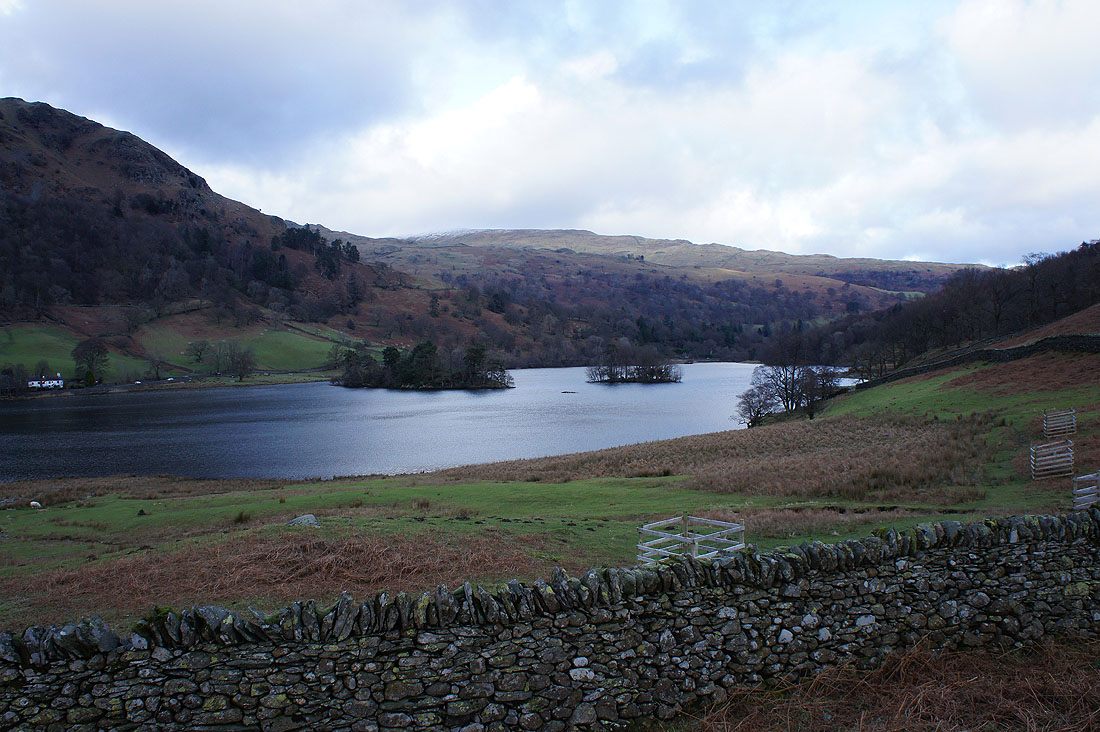 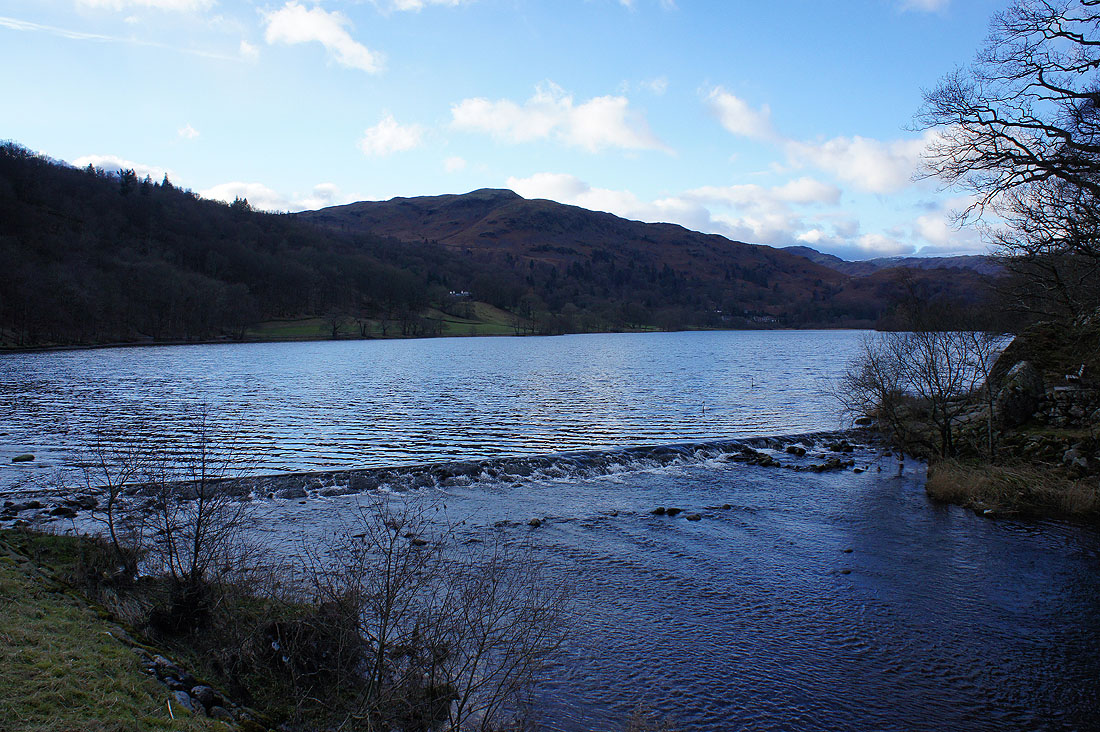 By Grasmere's weir with Silver How the backdrop 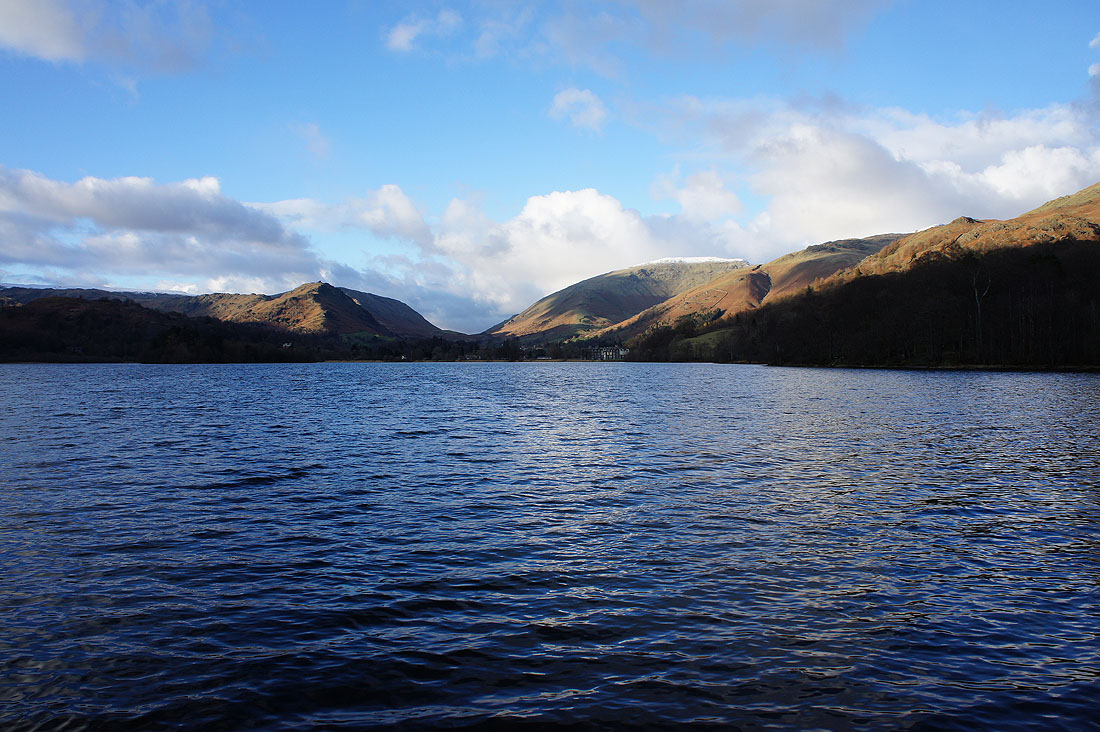 Grasmere from the lake-shore path. Now follows a long road walk back to Grasmere. It certainly felt long.
Return to Home
Return to Lake District Walks
Return to Walking Diary 2016