With today being my last weekday off work I decided to pop out this afternoon and do a walk from Dunsop Bridge in the Forest of Bowland. The route I followed is one that I've done before although I changed my way off Whins Brow by heading down to the Trough of Bowland instead of returning to the bridleway down to Trough Barn. It was very wet underfoot as I made my way from the bridleway up to the trig point, so not wanting to go through it again on the way back I followed the fence down to the Trough. With the ground being that bit steeper it wasn't as boggy. It did mean a bit more road walking though. The cloud from overnight rain took a while to clear this morning but by lunchtime the skies were brightening so that during the afternoon I had sunny spells but with a strong cool wind.

​After having a bite to eat in the Puddleducks Tearoom in Dunsop Bridge I set off by taking the bridleway that follows an access road from the post office up the valley of the River Dunsop to some cottages. Here it crosses the river via a footbridge before joining another access road and bridleway that continues up the valley to some waterworks buildings. After crossing the river I turned left and left again into Brennandale to continue along the road to Lower Brennand Farm and to the road end at Brennand Farm. At Brennand Farm I took the Ouster Rake bridleway that heads south up the hillside of Whins Brow and when I reached its top I left it to follow the fence up to the trig point on the top of Whins Brow. After taking in the view from the top I made my way down by the fence to the Trough of Bowland. This left me with a long walk along the Trough road back to Dunsop Bridge.
Route map 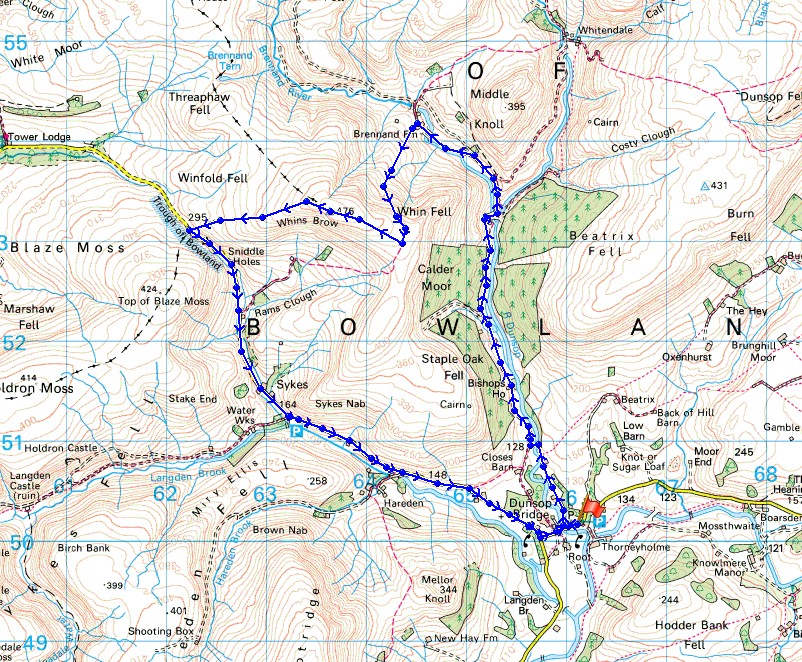 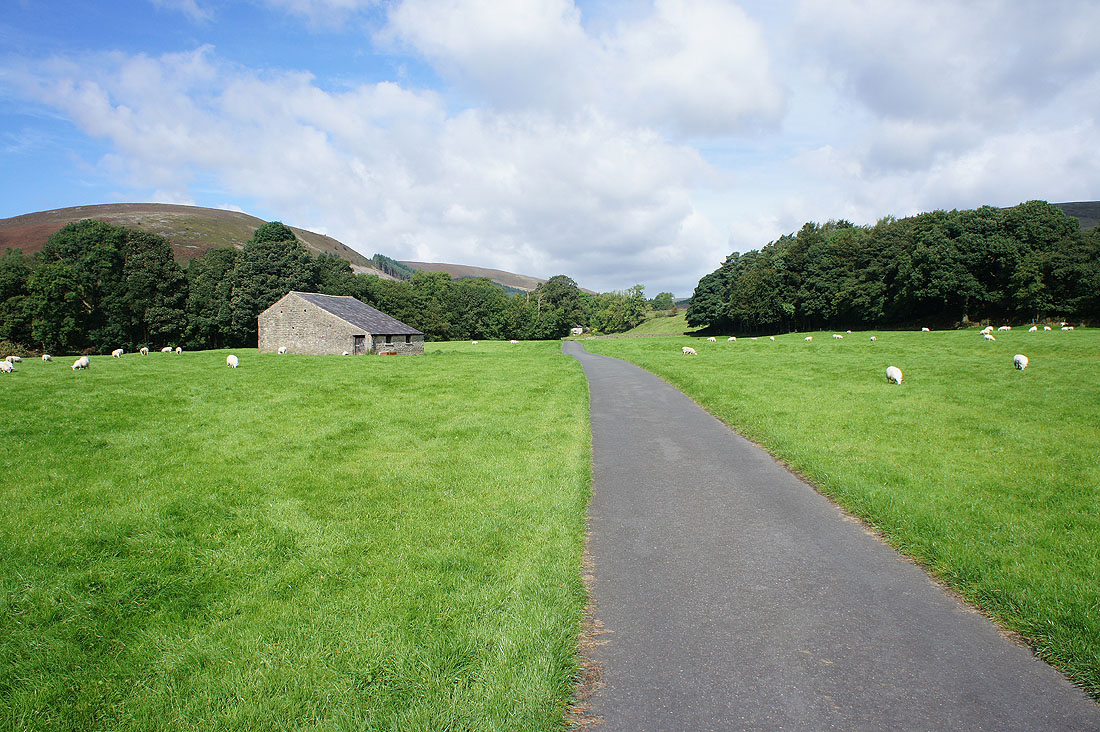 Leaving Dunsop Bridge behind I take the bridleway that follows the private road up the valley of the River Dunsop.. 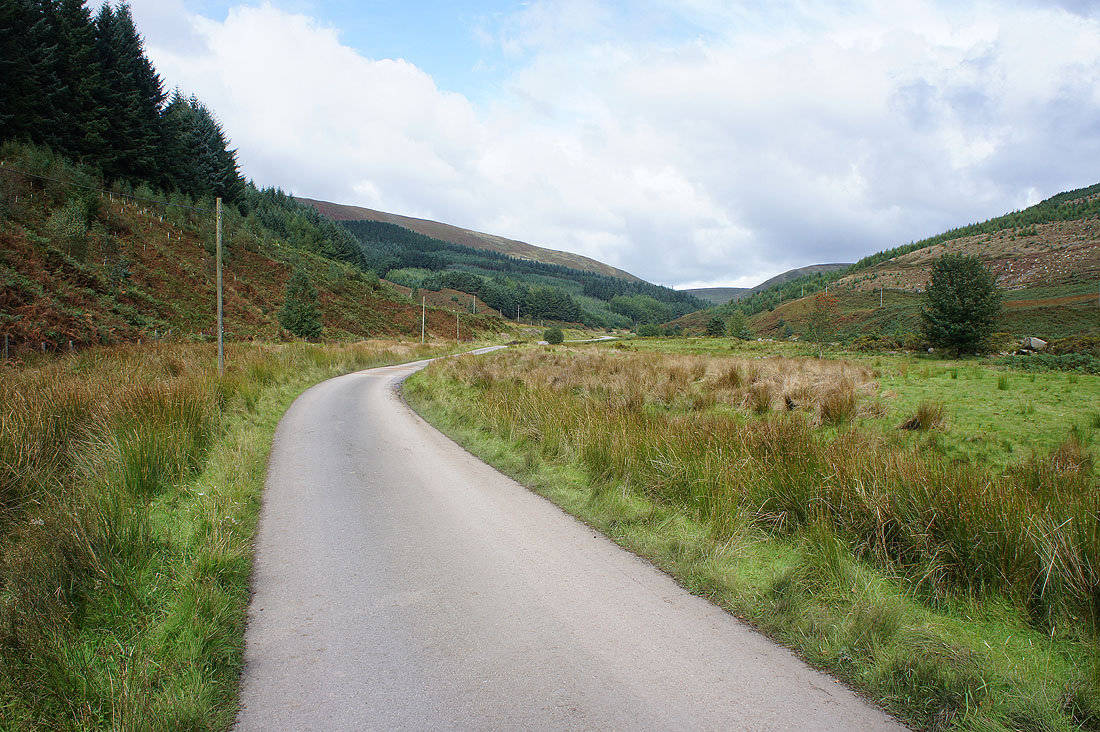 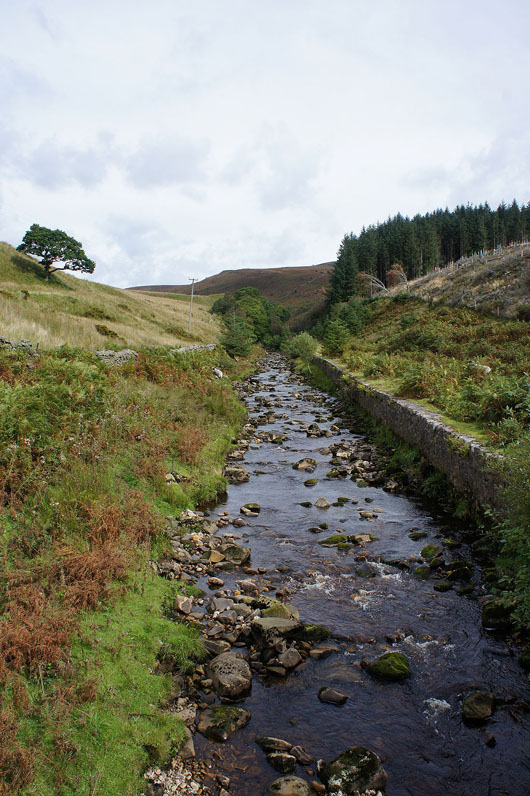 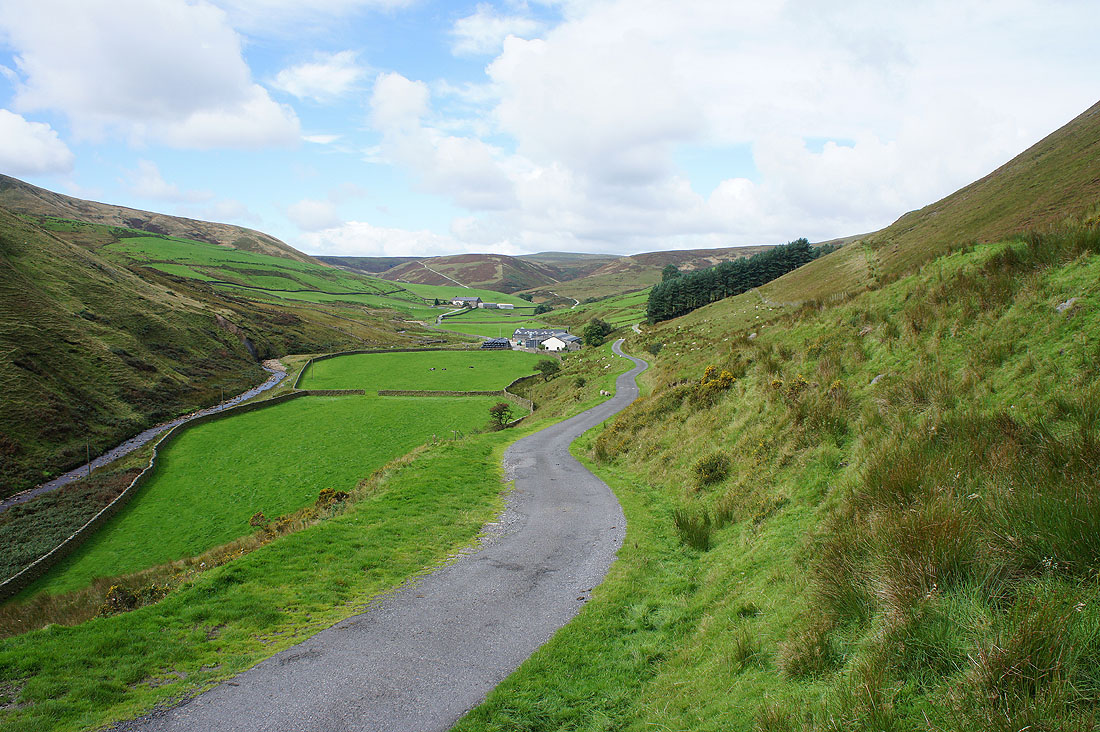 Into Brennandale with its two farms. Lower Brennand closer and Brennand Farm beyond. 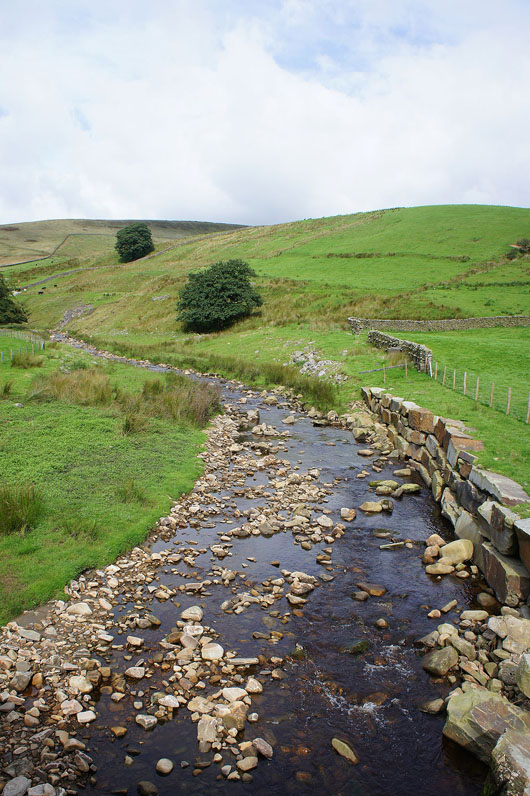 The Brennand River as I near Brennand Farm 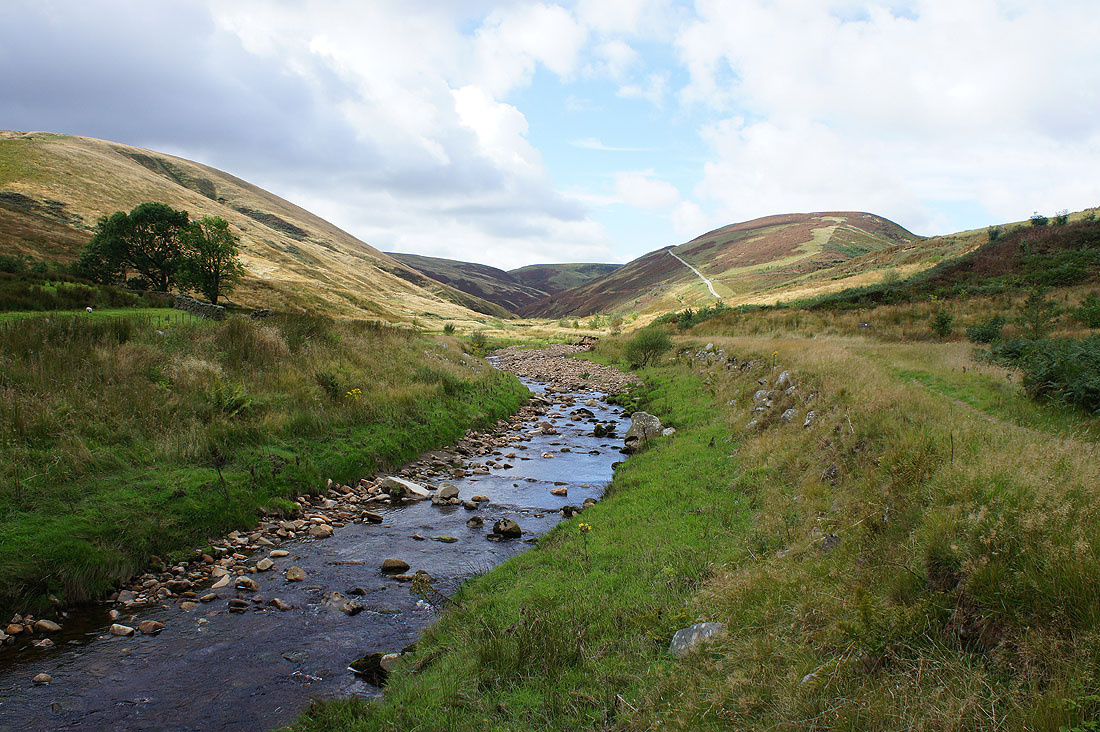 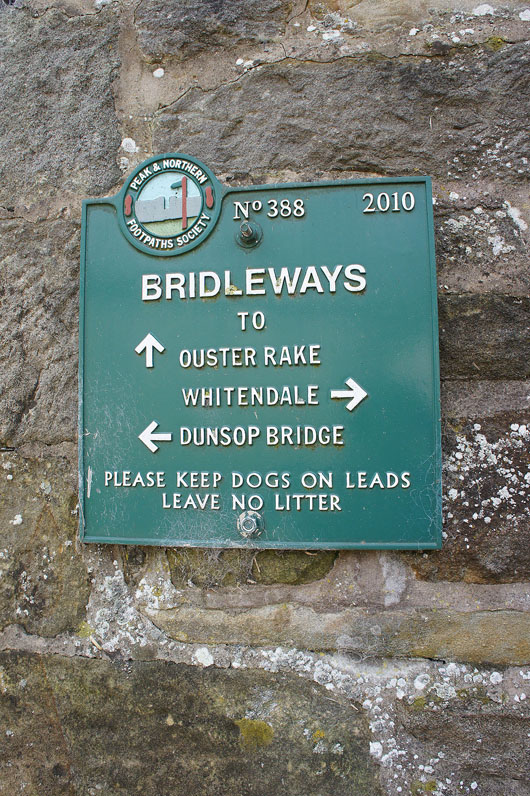 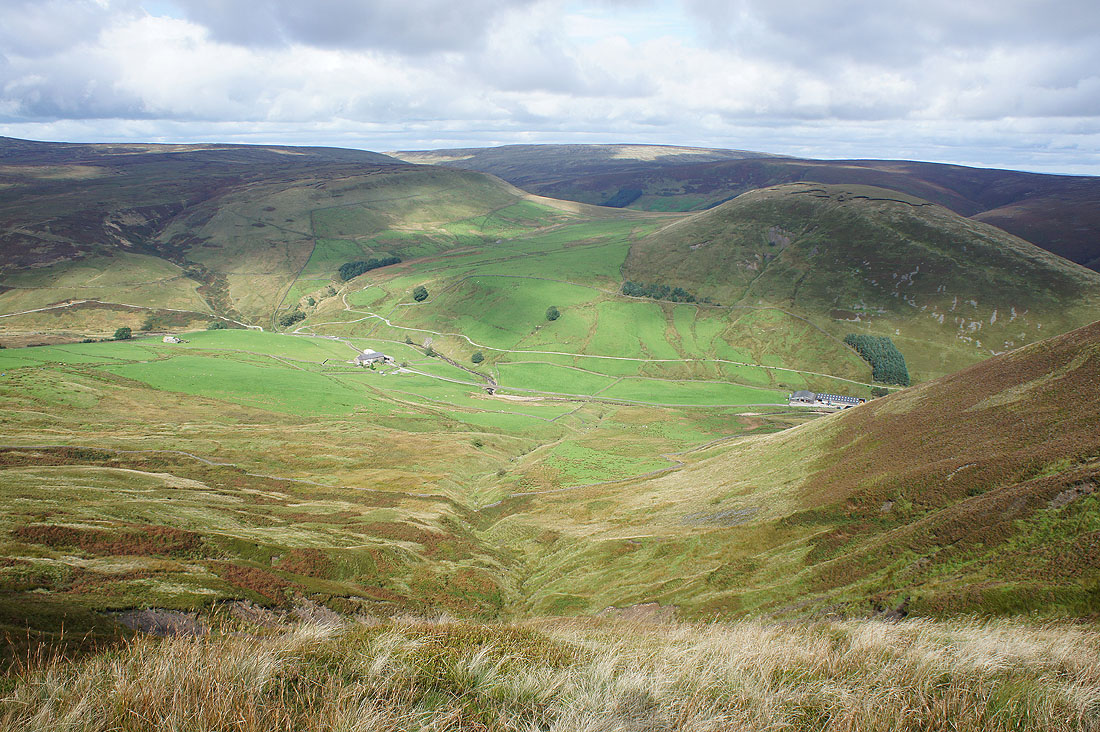 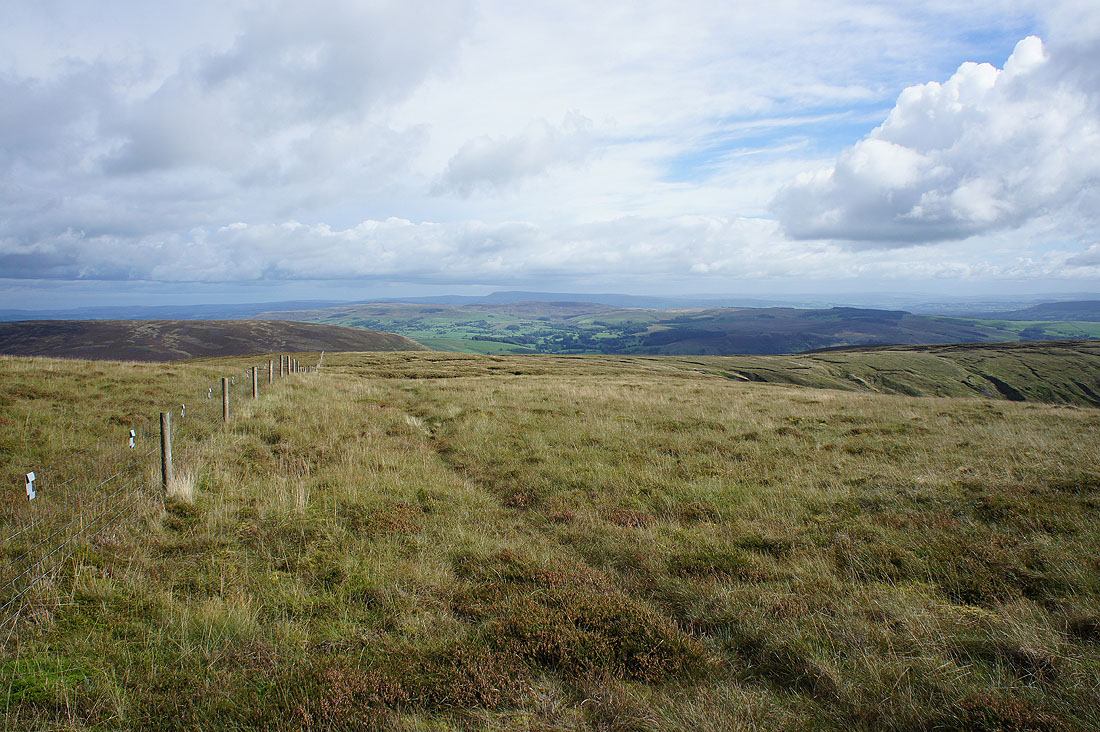 The bridleway was left behind at its summit to follow this fence up to the trig point on Whins Brow. Looking back to a distant Pendle Hill. 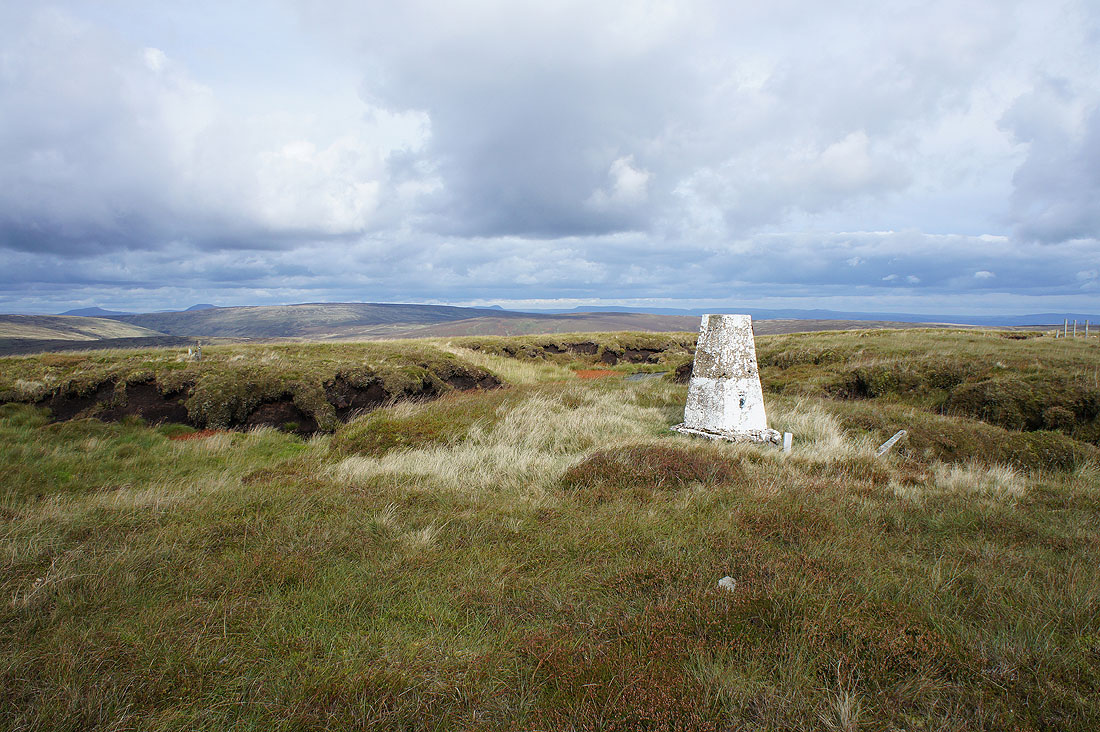 At the trig point on Whins Brow and there's a pretty good view from here. The shadowed tops of Whernside, Ingleborough, Penyghent and Fountains Fell can be seen in the distance beyond the nearby White Hill and Baxton Fell. 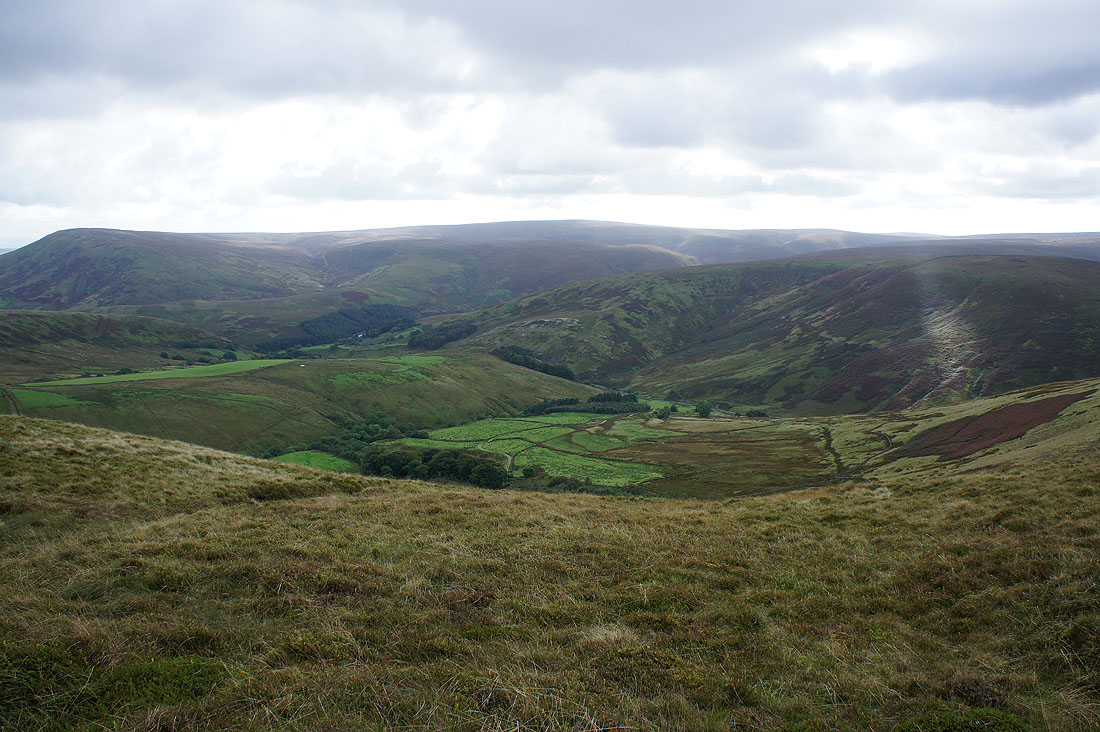 The valley of Losterdale carries the Trough road 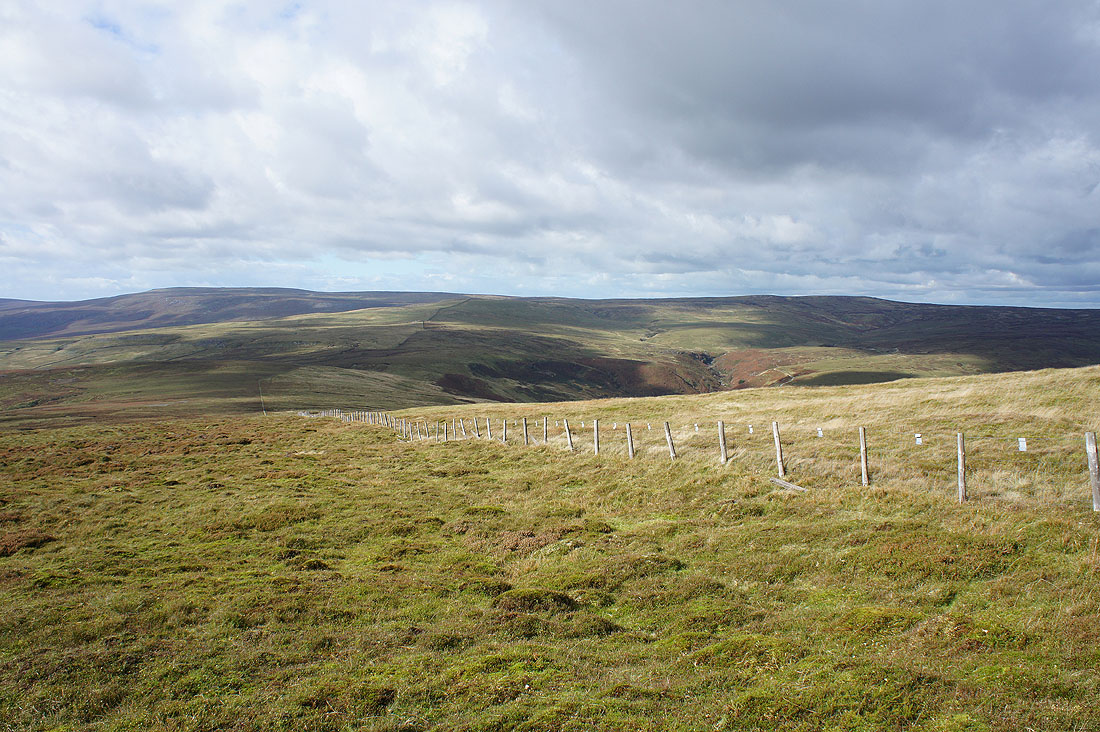 To the north lie the highest and third highest summits in the Forest of Bowland, Ward's Stone and Wolfhole Crag 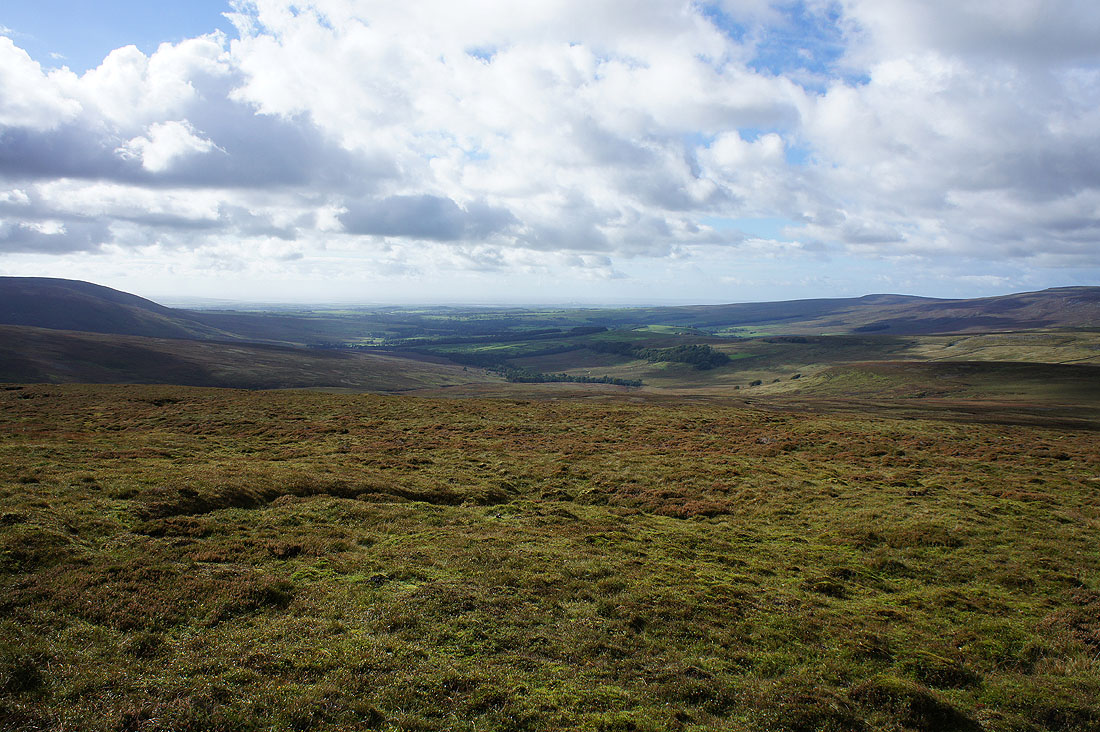 Wyresdale and the coast to the west 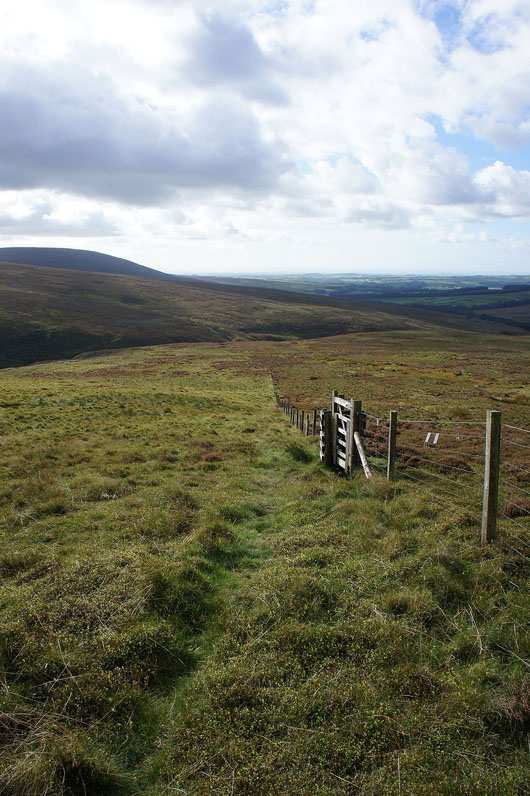 Following a fence down to the Trough of Bowland. I used the gate to cross to the other side. 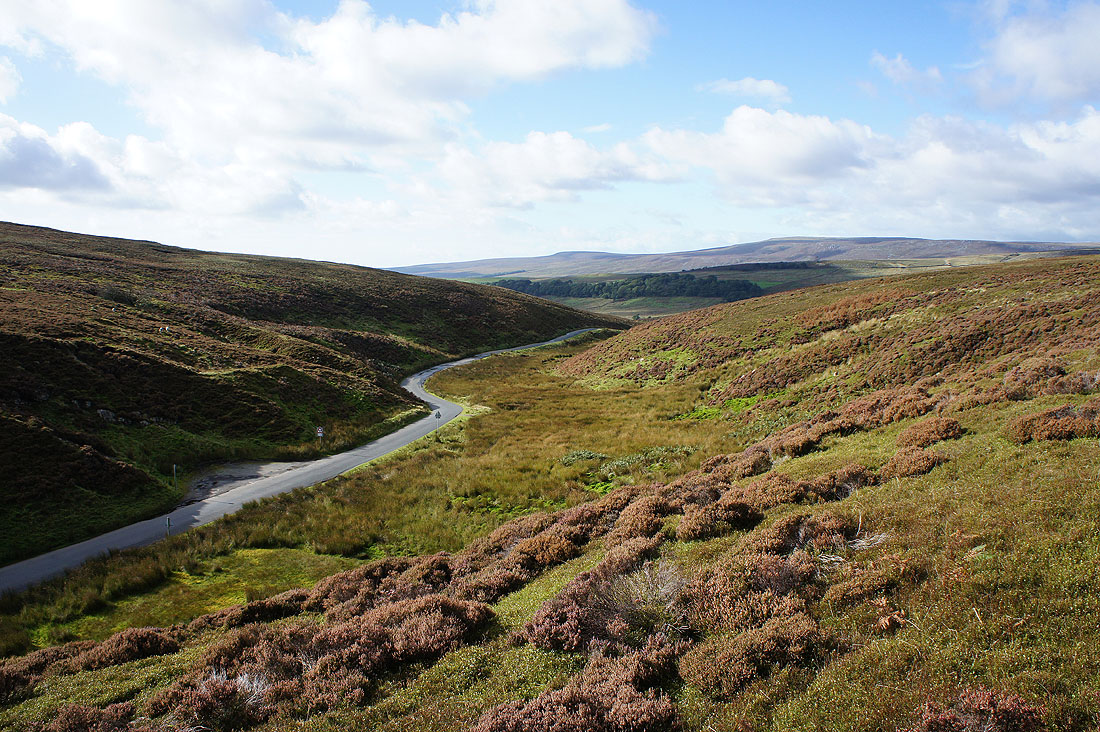 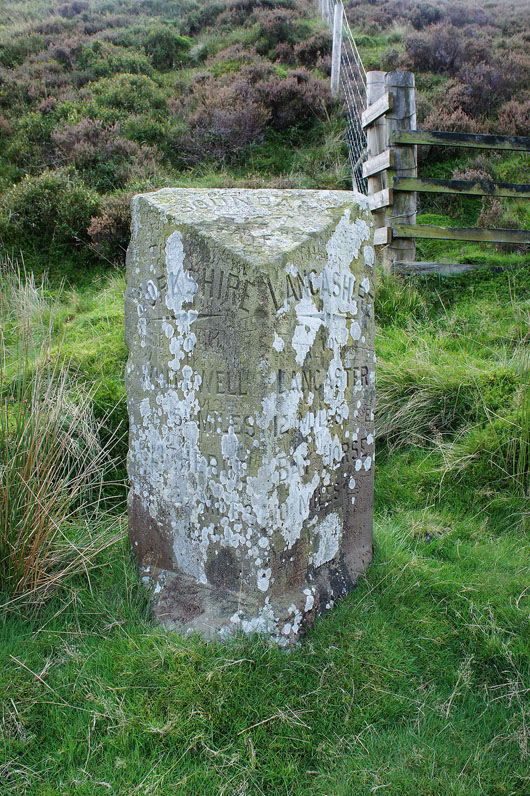 The Grey Stone of Trough at the summit of the road marked the county boundary between Lancashire and Yorkshire until they fiddled with it in 1974. 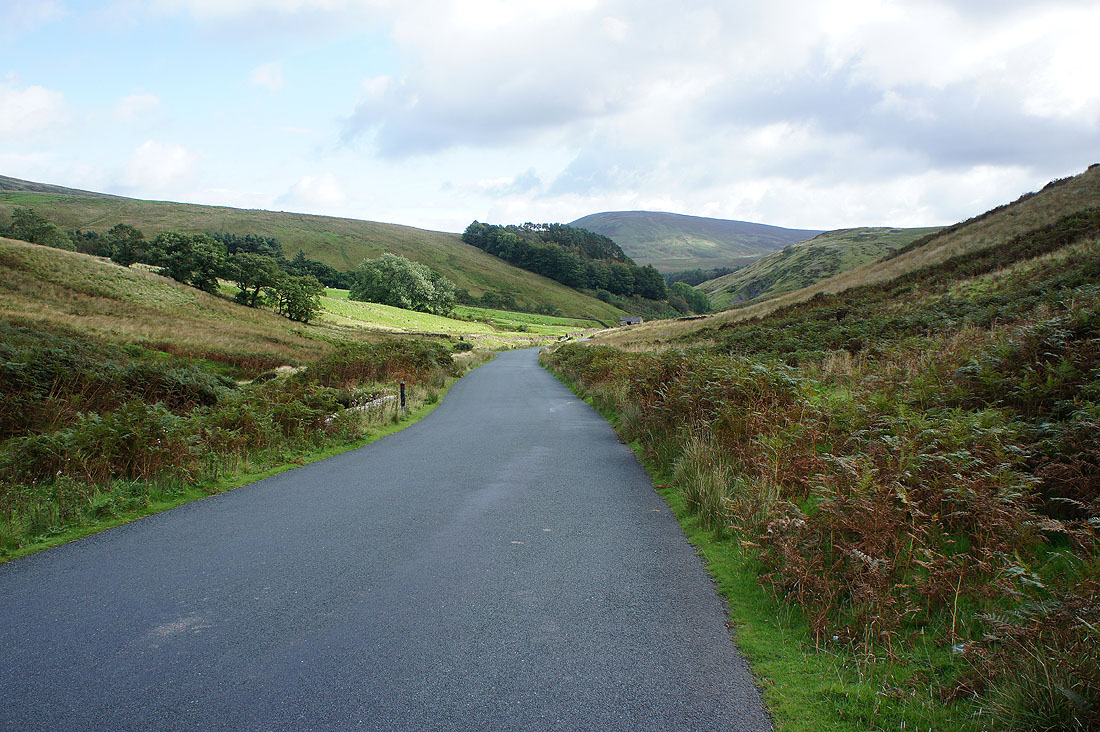 A walk down the road back to Dunsop Bridge to finish with. It's fairly quiet though. 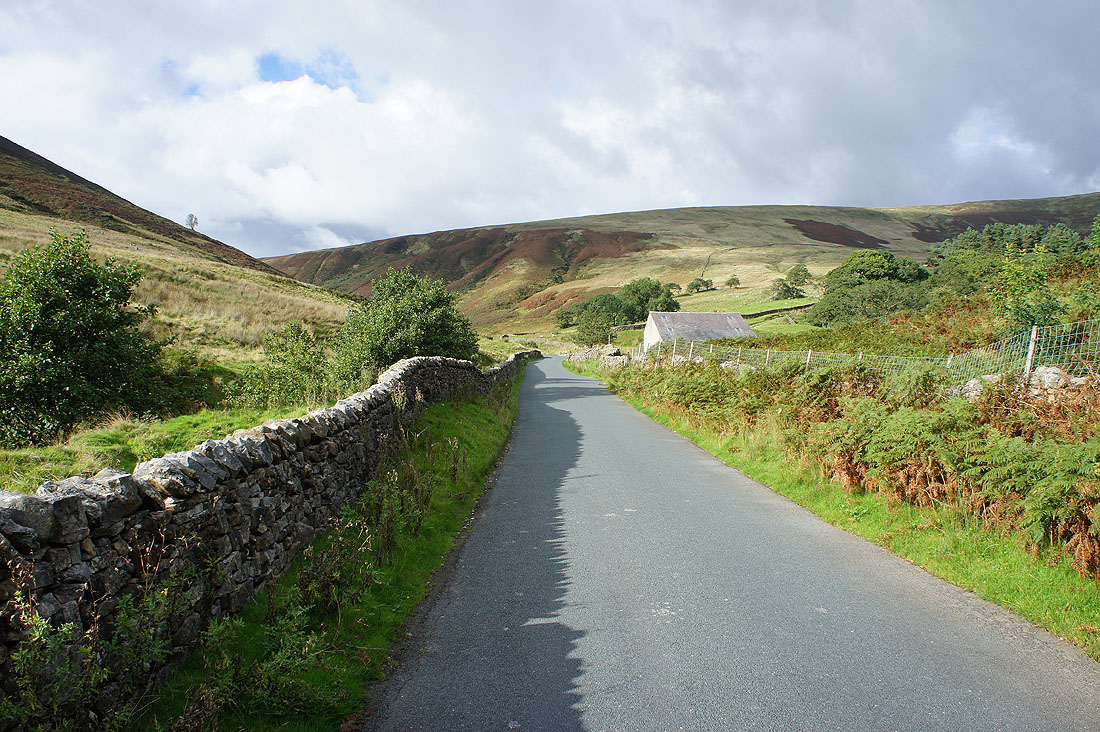 Looking back as I pass Trough Barn 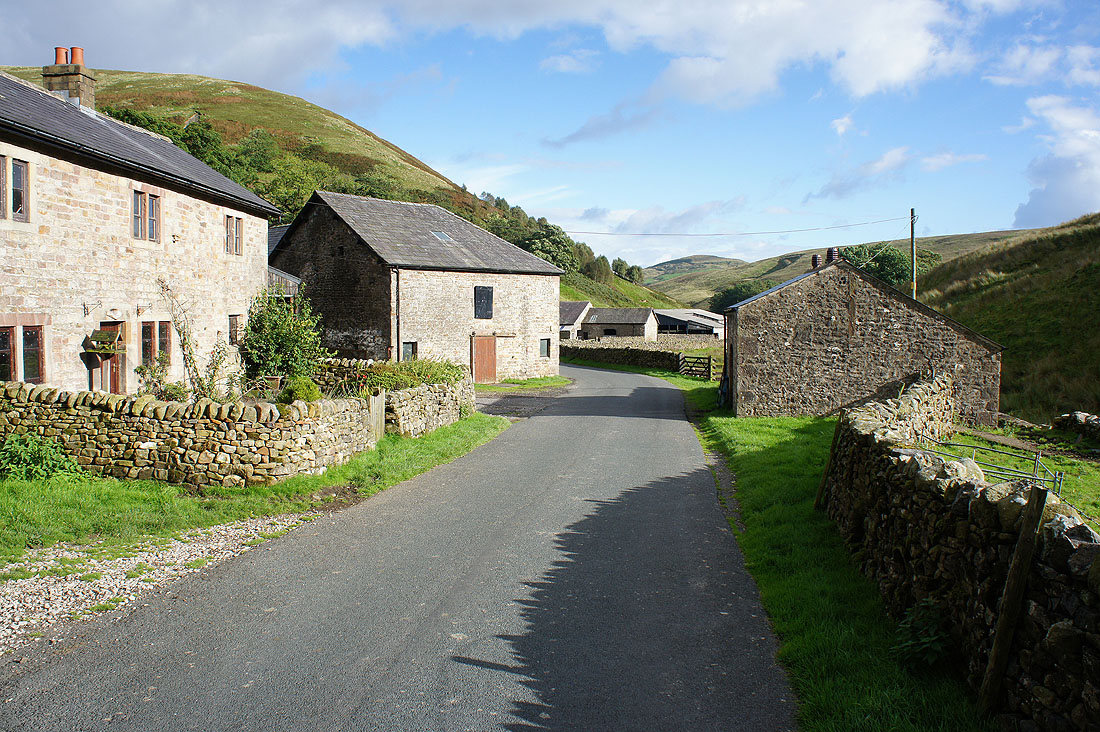 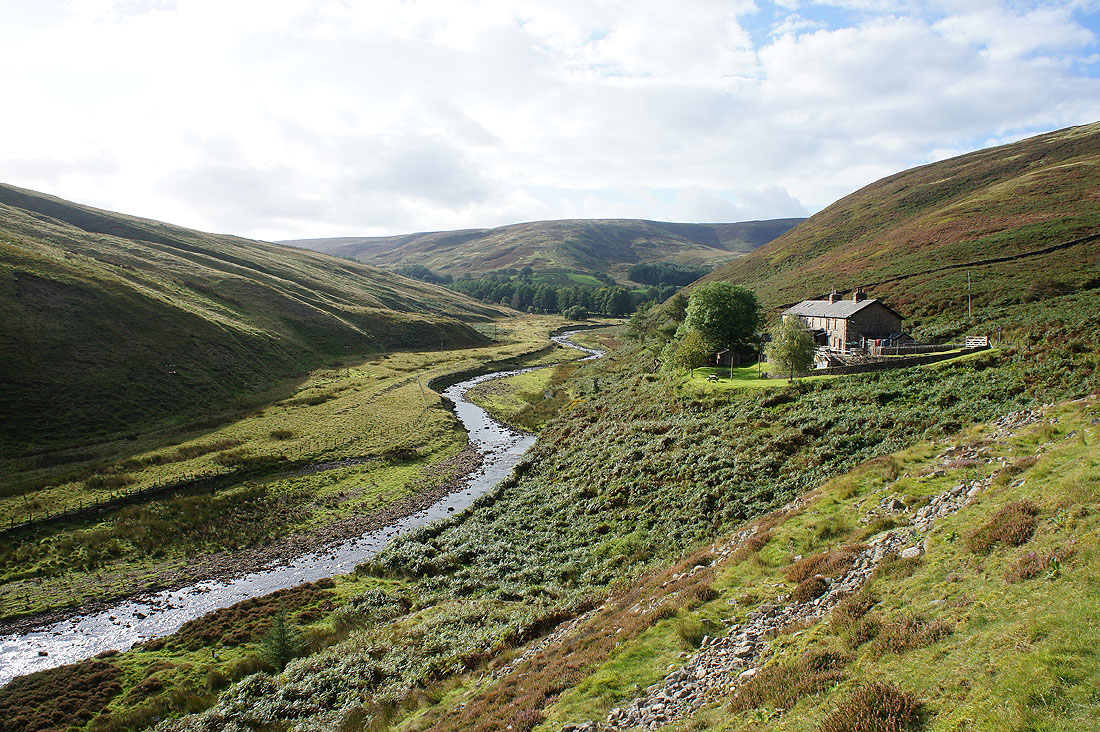 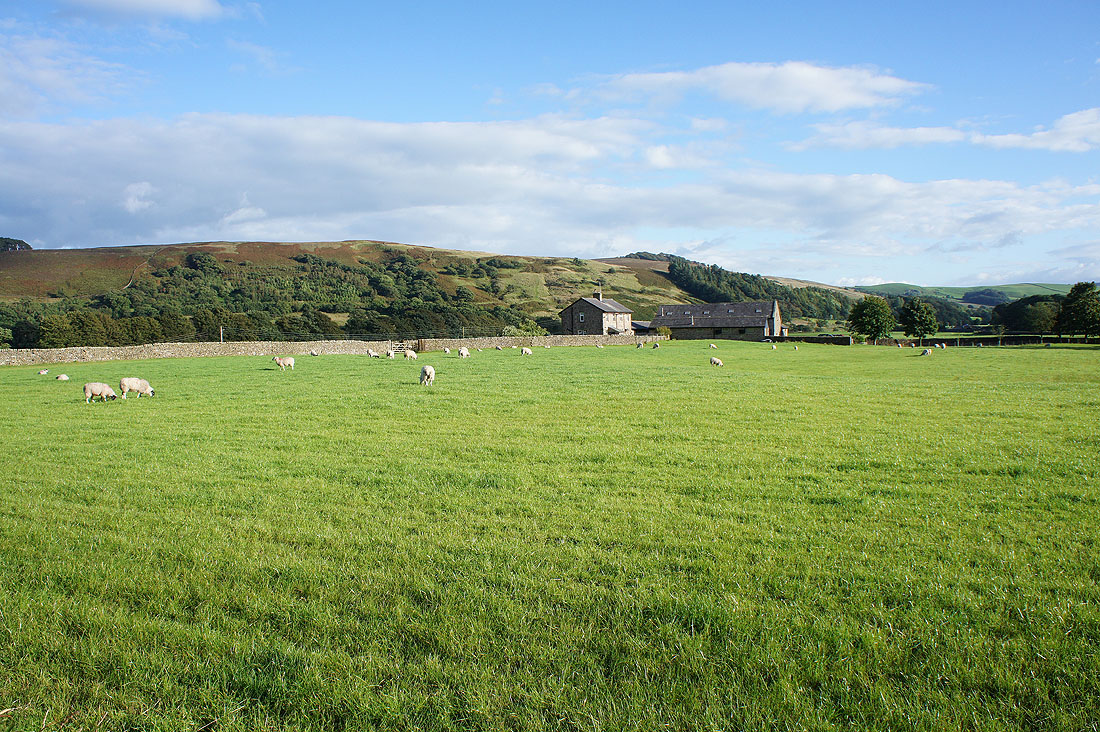 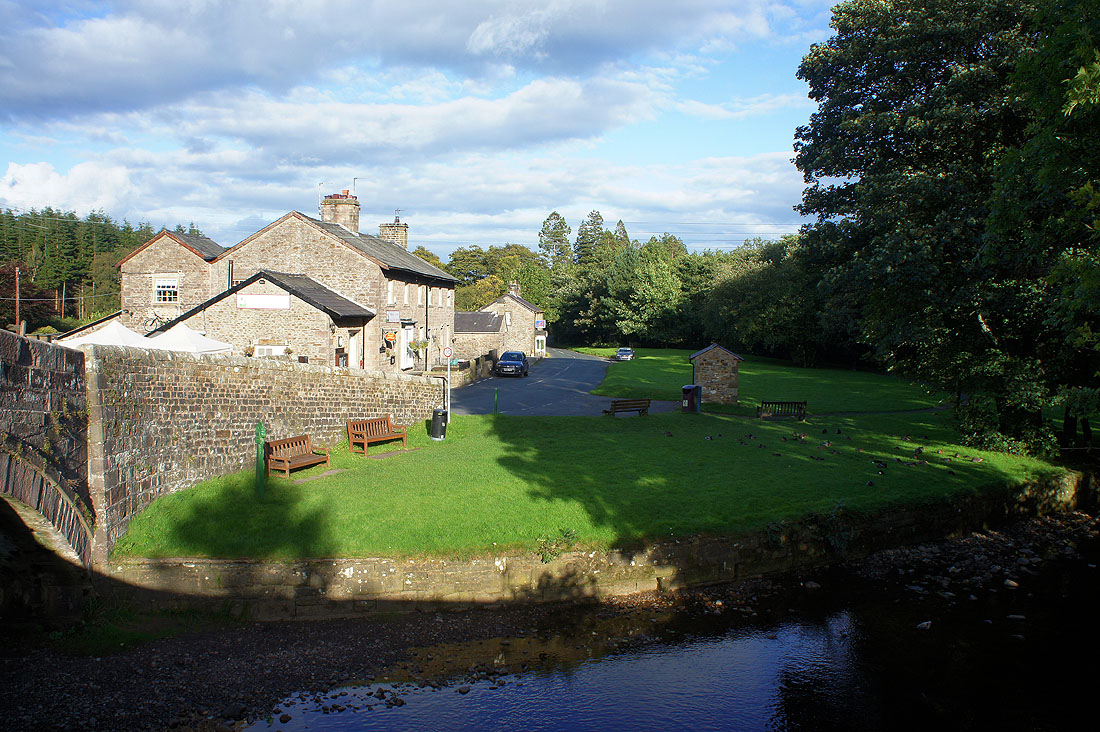 A lovely end to the afternoon as I arrive back in Dunsop Bridge
Return to HOME
Return to Forest of Bowland, Pendle & West Pennine Moors Walks
Return to Walking Diary 2016