Maybe not the best of weather for a pre-Christmas walk but it was better than recent days. A couple of brief showers passed through while I was up on Kinder Scout and with the strong wind behind them it wasn't pleasant but there was still a nice bit of winter sunshine to enjoy. Kinder Downfall was great to watch as it did battle with the wind.

From where I parked by the roadside at Bowden Bridge I made my way up the Kinder Road to Kinder Reservoir. I followed the path by the shoreline to William Clough and then the path up the clough to its top. The next part of the route took me along the edge top path to Kinder Downfall and on to the trig point at Kinder Low. My route back took me down Kinderlow End, across fields to Tunstead Clough Farm and down its driveway to the Kinder Road.
Route map 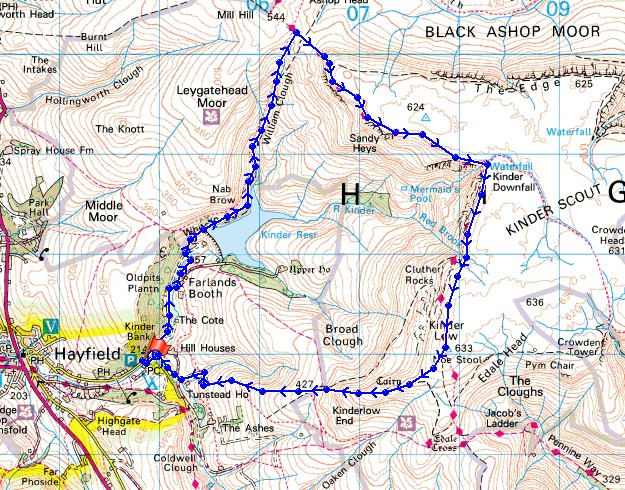 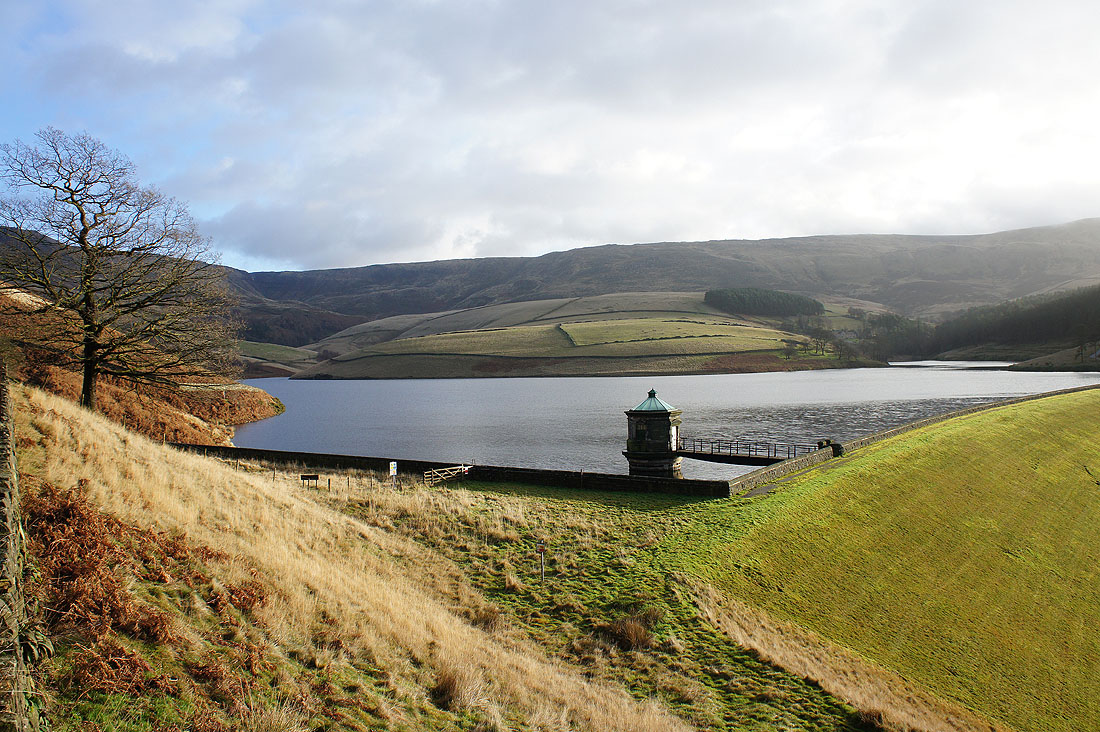 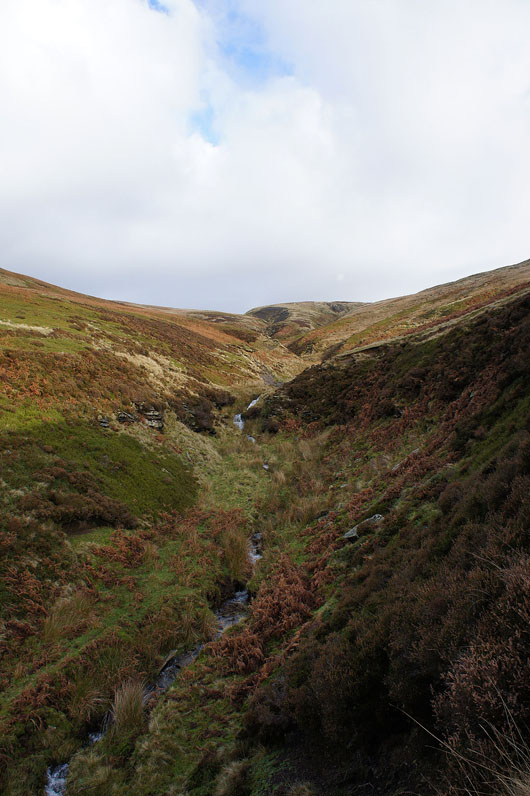 On the path up William Clough. Lots of water pouring off the hills today. 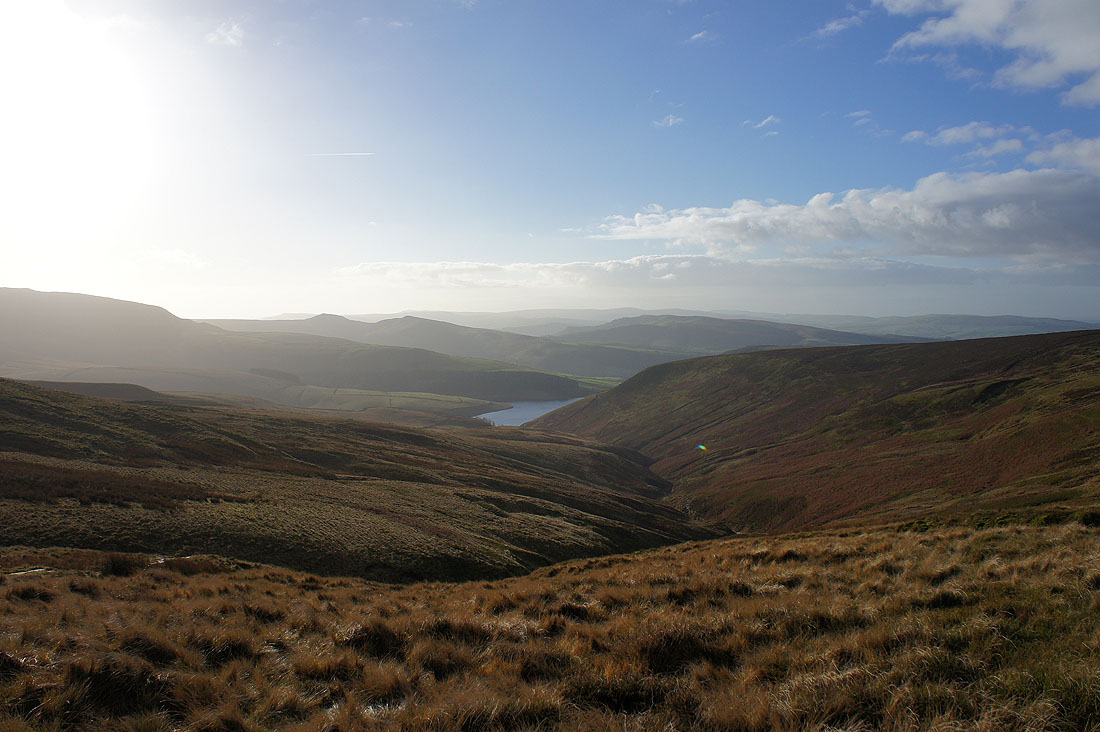 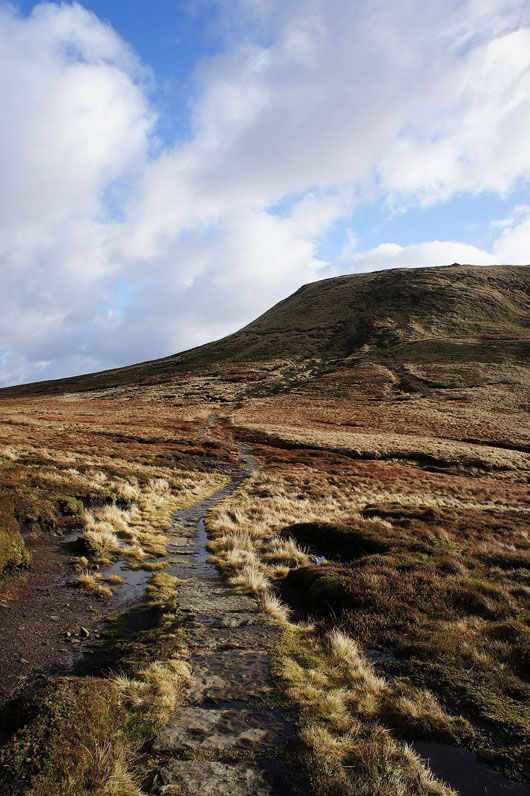 Heading up onto the western end of Kinder Scout 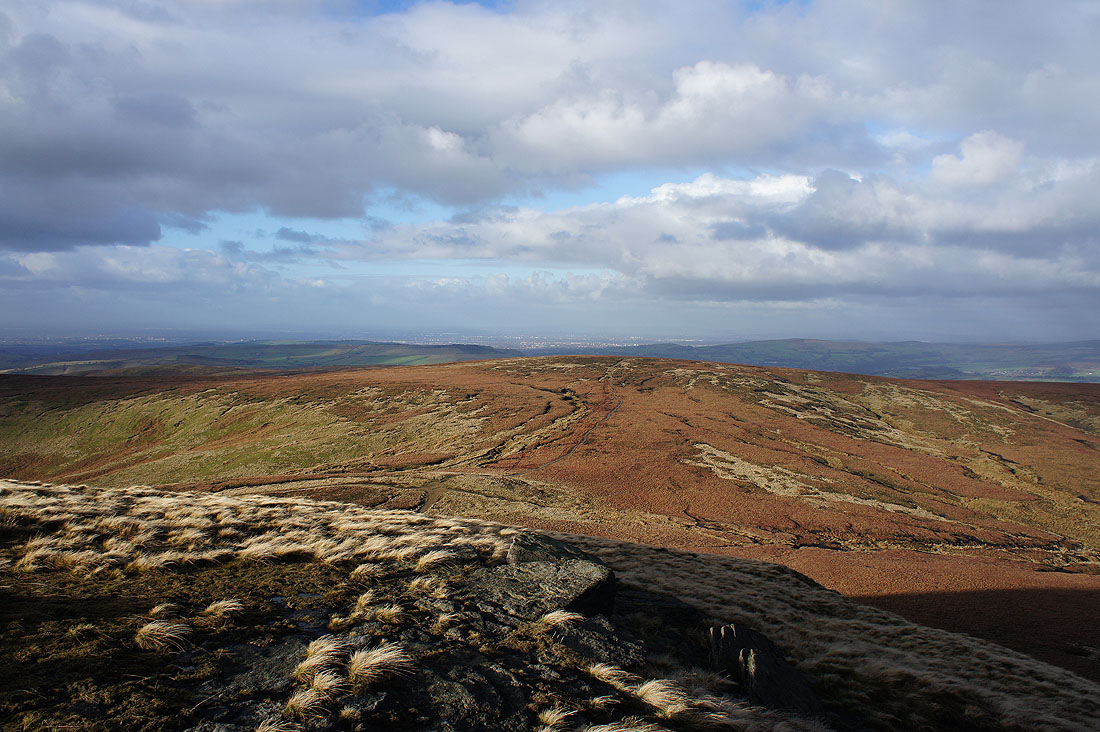 Before I head for Kinder Downfall I'll have a look at the view to the north that I won't have for the rest of the walk. A distant Manchester beyond nearby Mill Hill. 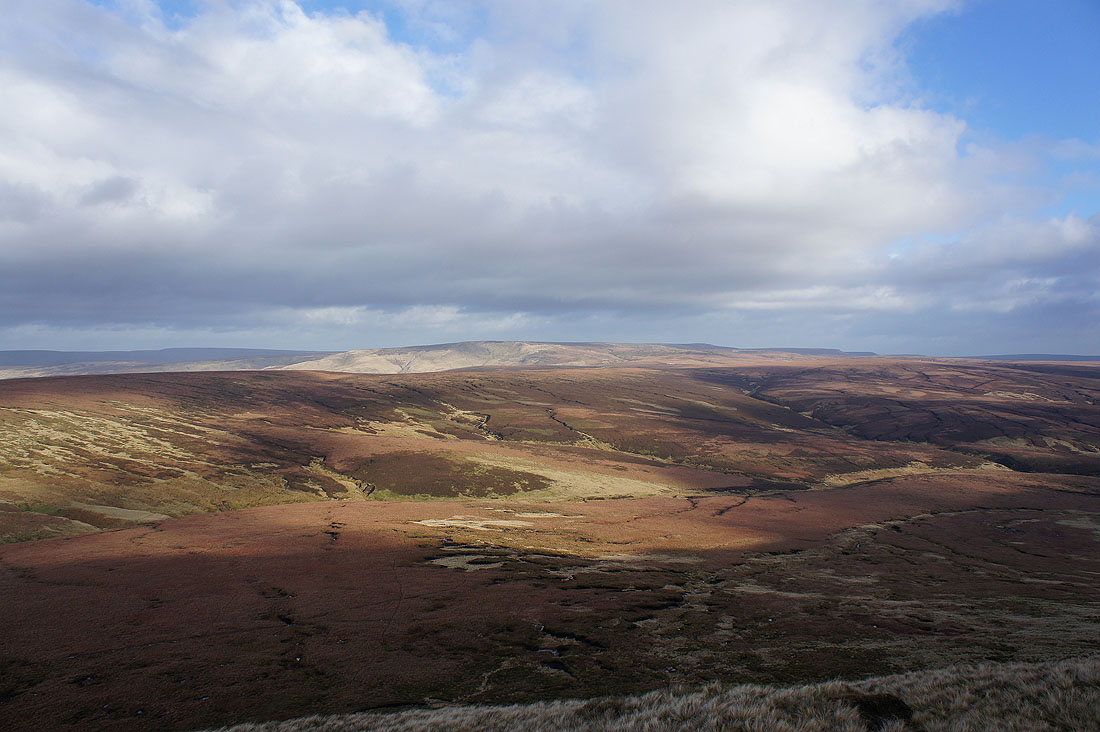 Bleaklow on the other side of the Snake Pass 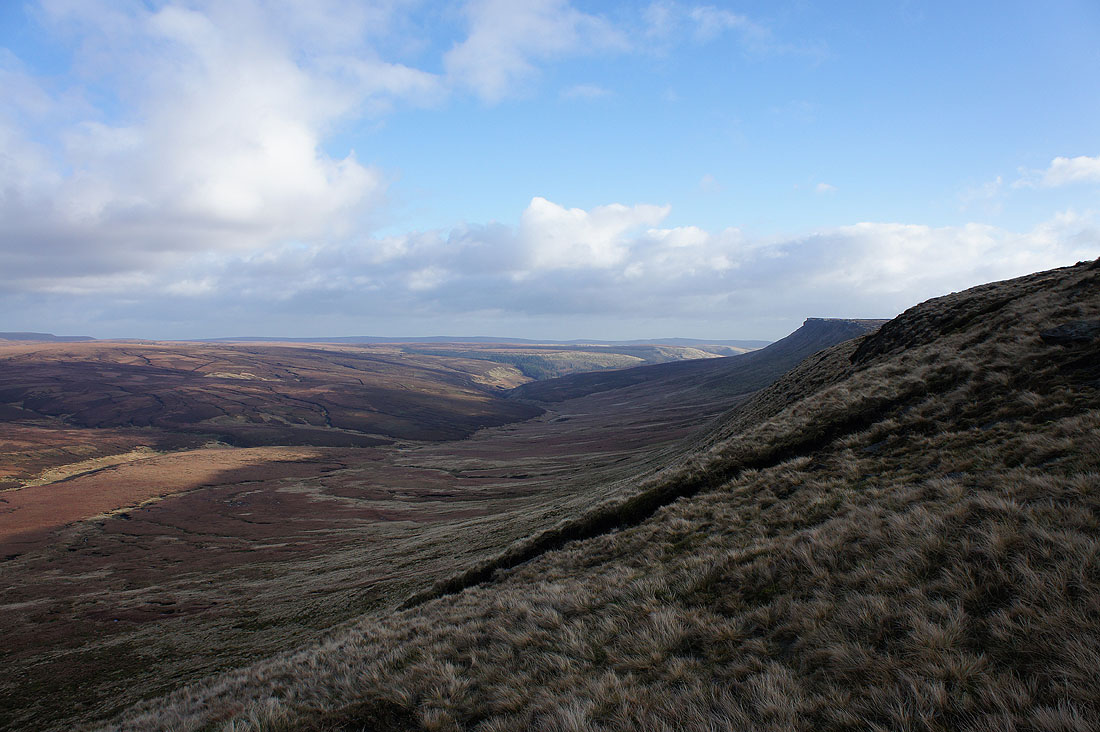 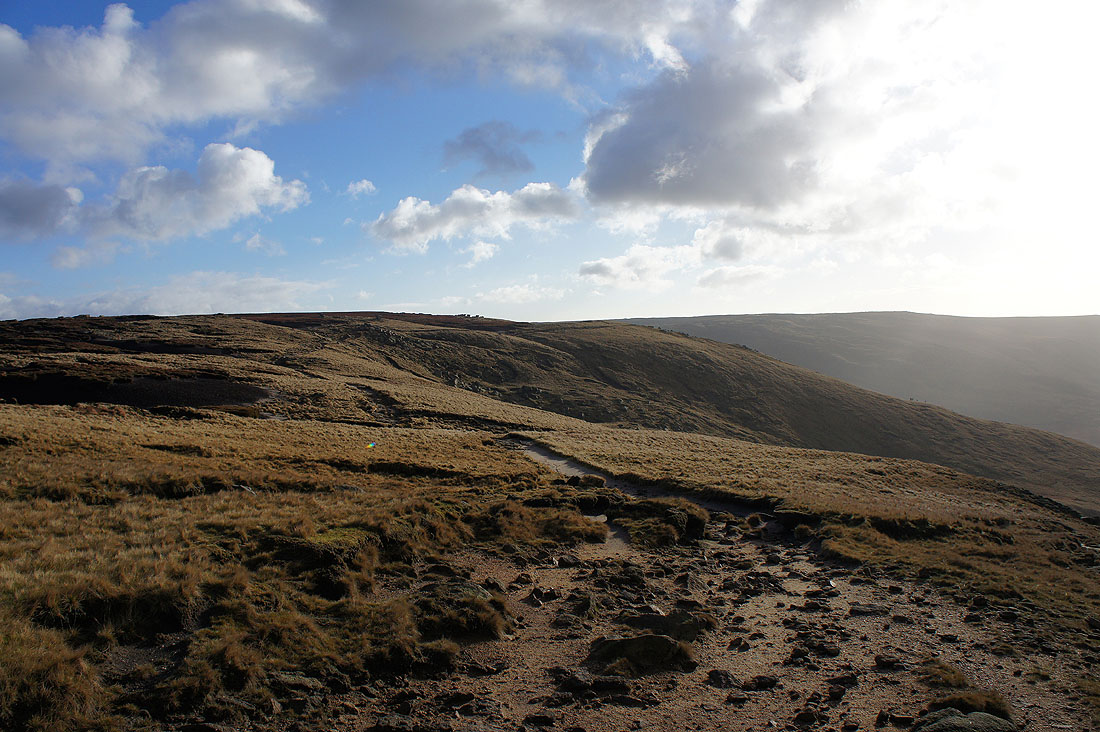 Following the edge path to Kinder Downfall and it's very windy 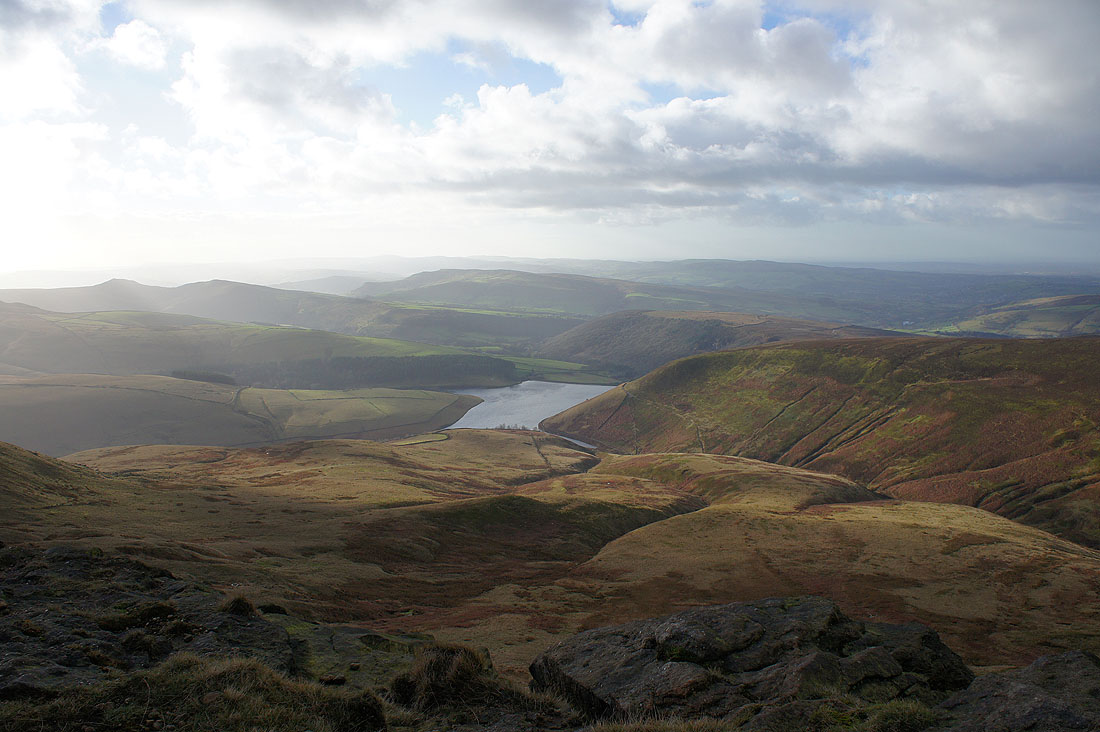 Kinder Reservoir is below on my right 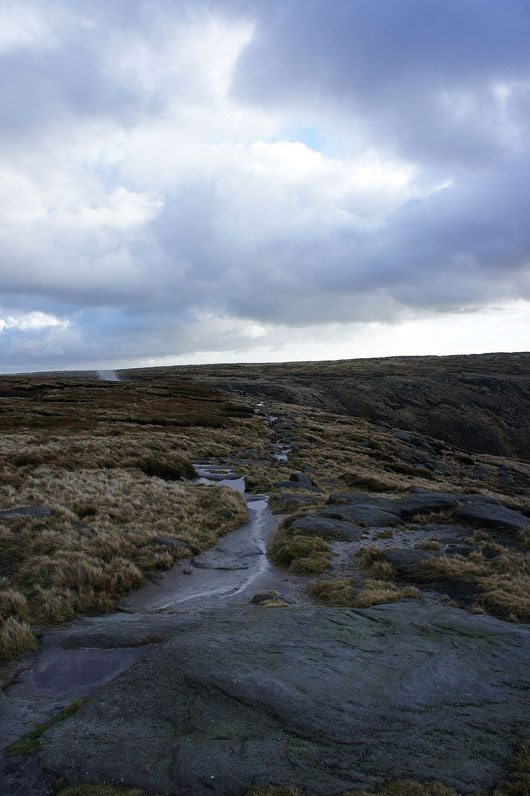 As I approach Kinder Downfall I can see spray being thrown up by the wind. Should be interesting. 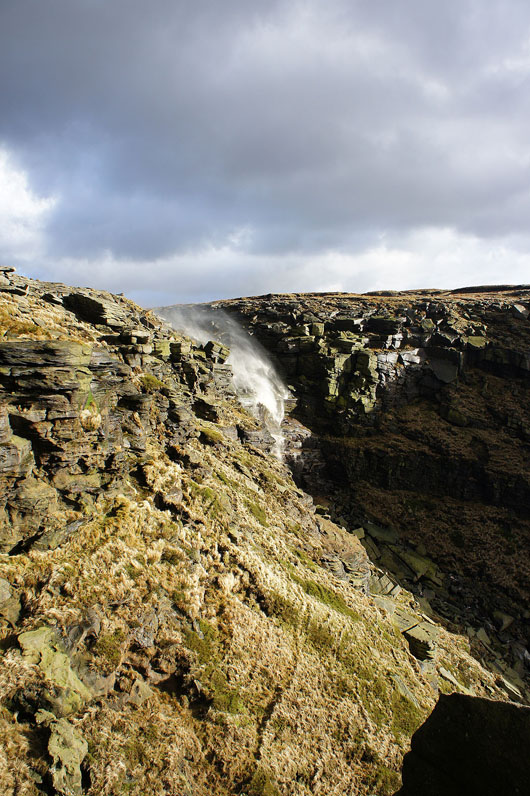 Kinder Downfall. Great fun to watch as the wind does battle with it. 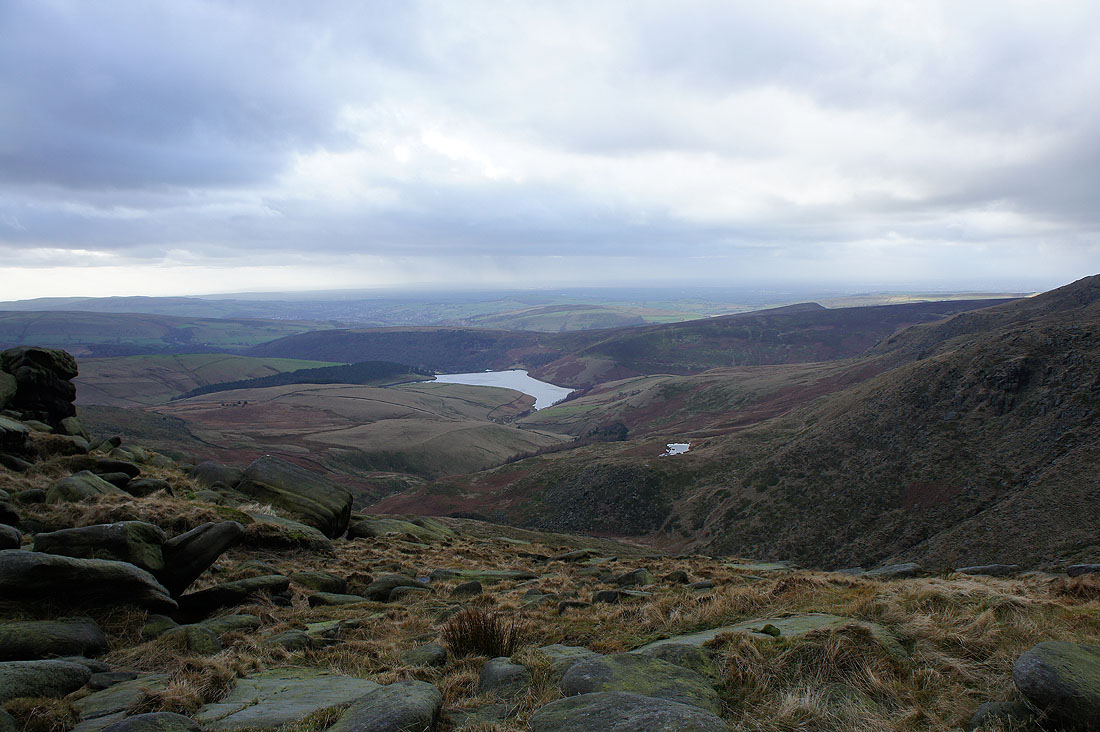 Kinder Reservoir and Mermaid's Pool as I head for Kinder Low 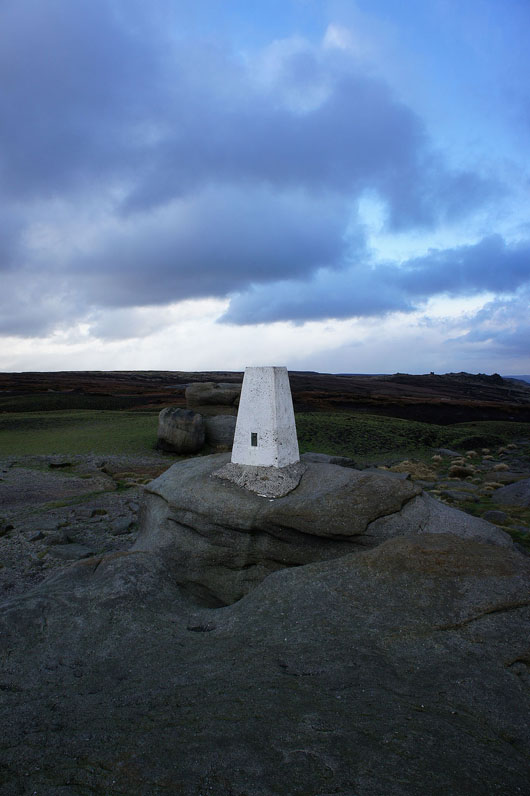 The trig point on Kinder Low. The bare peat has been seeded and the green of the fresh grass really stands out. Hopefully the restoration continues to succeed. 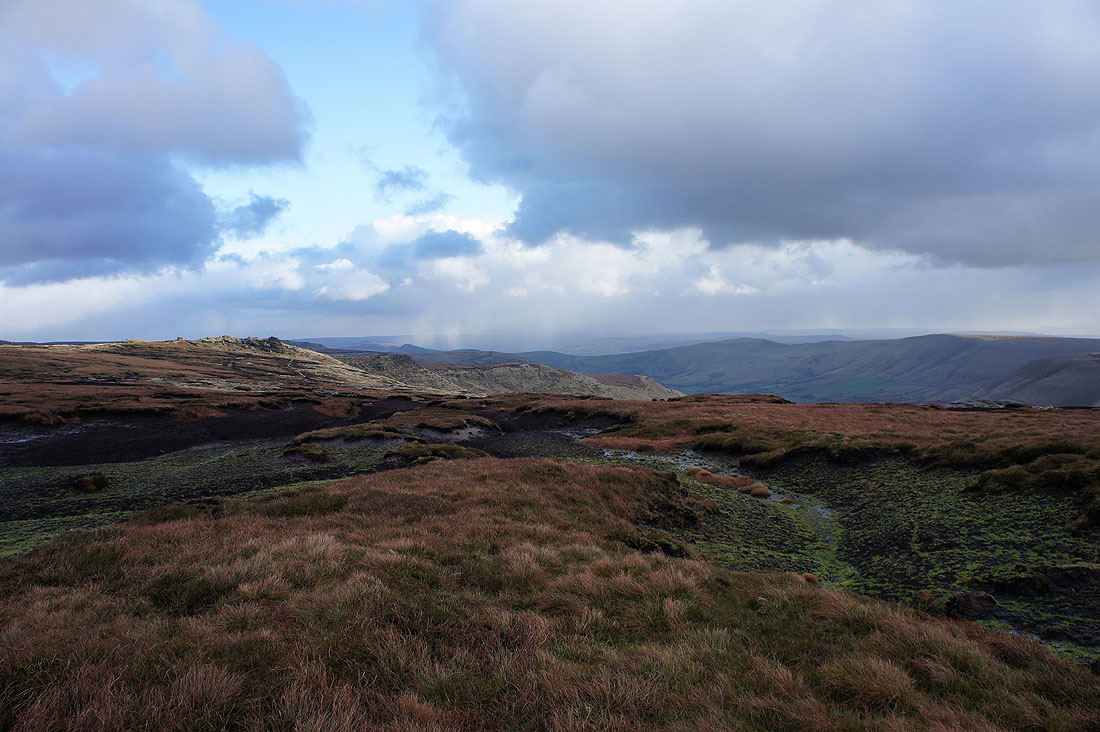 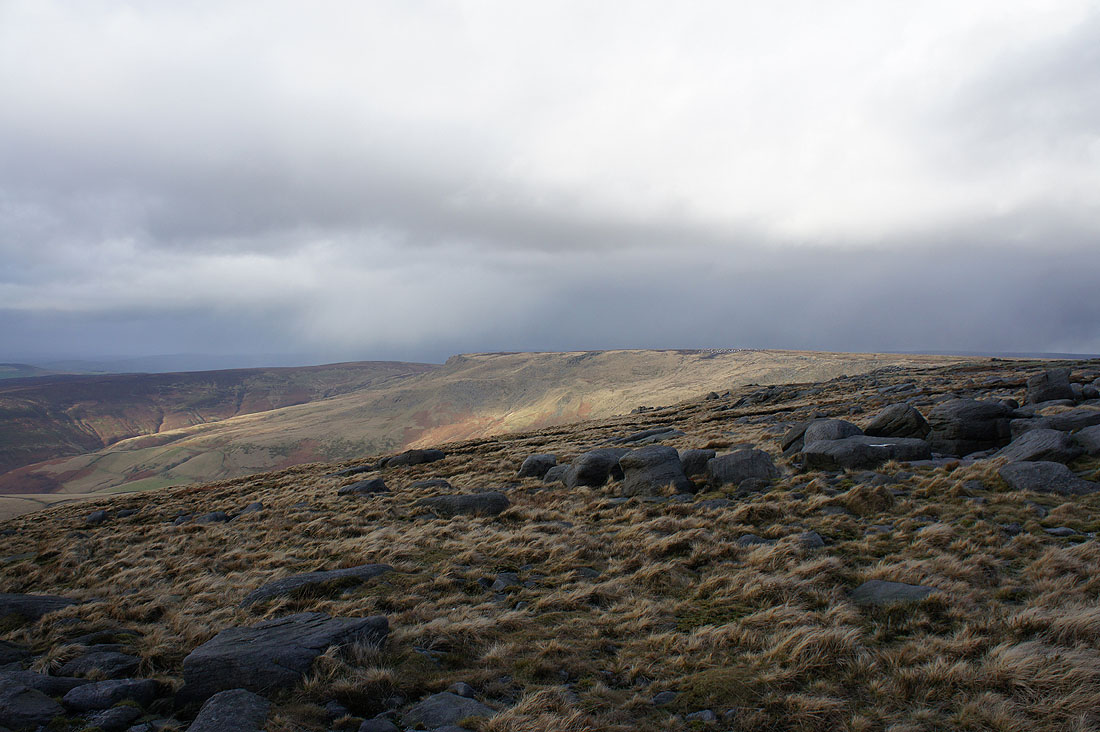 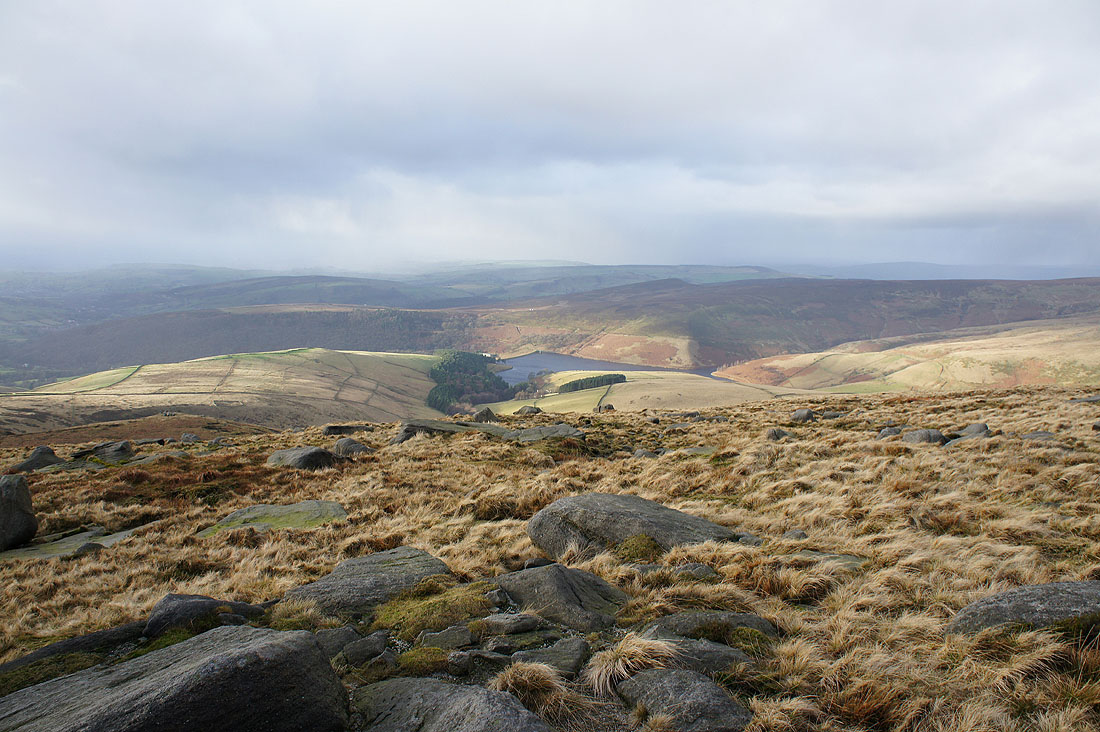 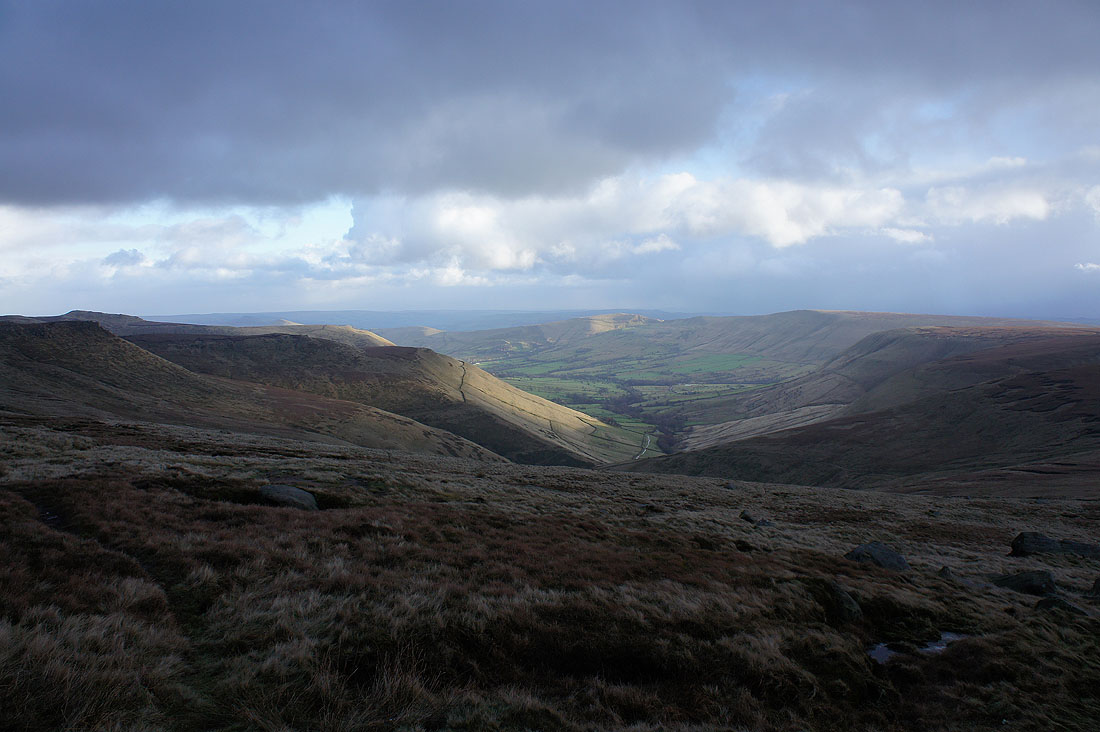 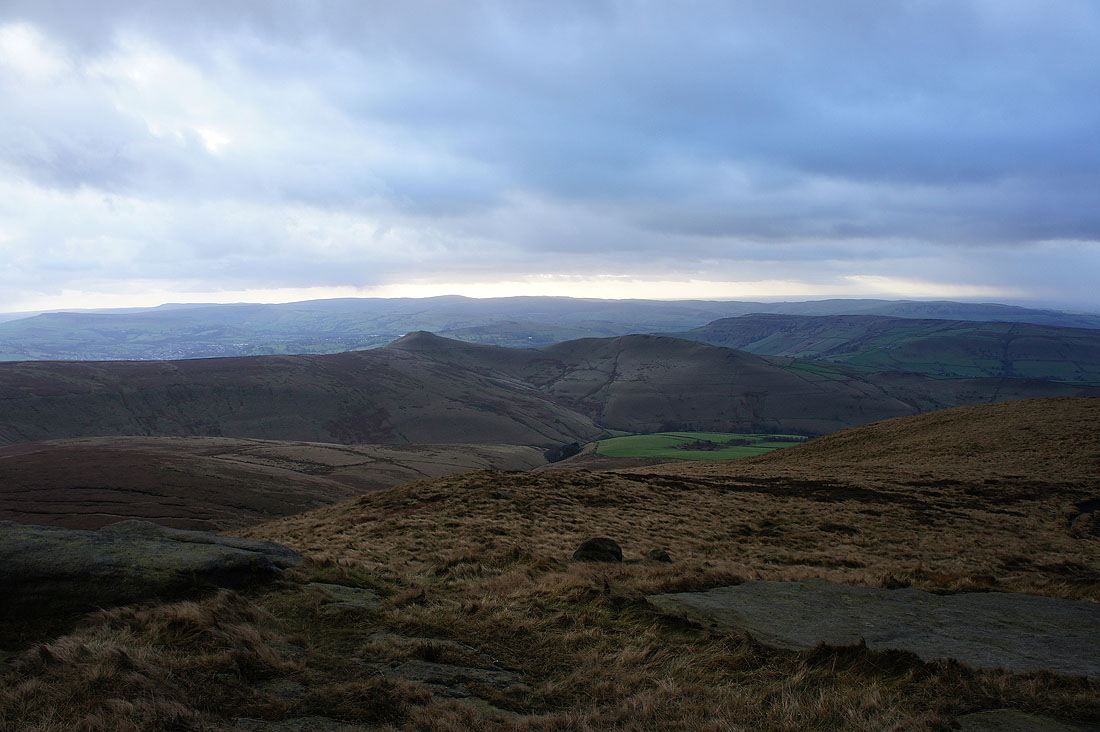 South Head and Mount Famine before.. 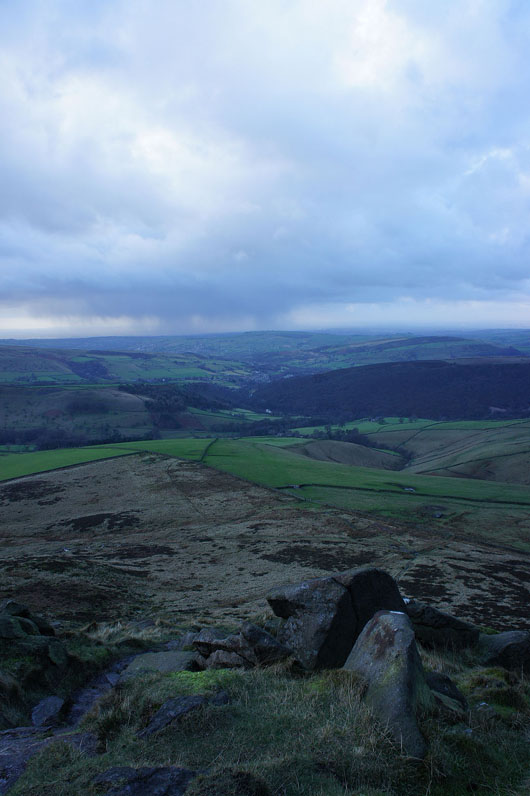 ..I descend Kinderlow End and cross the fields below to head back to Bowden Bridge
Return to HOME
Return to Peak District Walks
Return to Walking Diary 2014